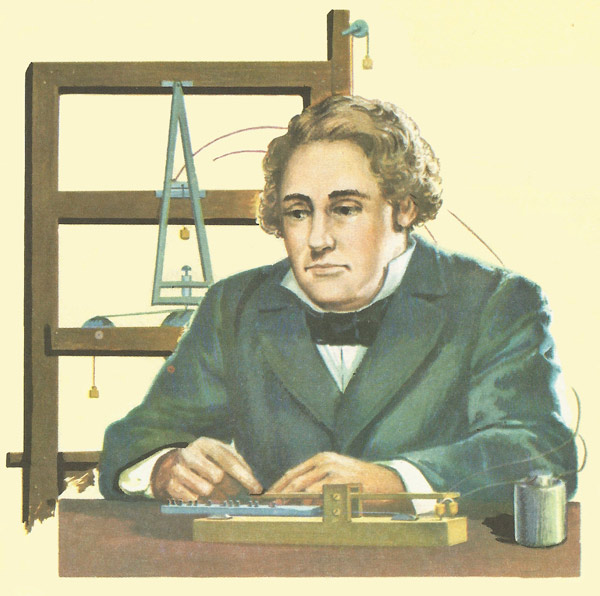 Samuel Morse transmits a message by telegraph. Behind him is the receiver on which the message is recorded.

This diagram shows the simplest possible telegraph circuit in which messages can be transmitted in one direction only.

A Morse key. The contacts at the front and rear of the arm can be seen. The spring that keeps the rear contact.

The head of an automatic transmitter used for tape with two lines of holes. 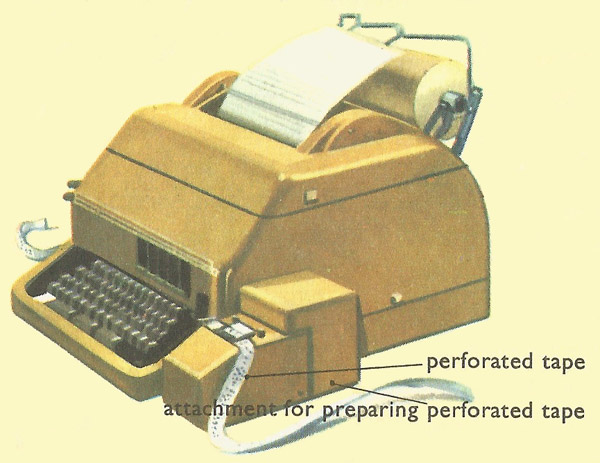 Two hundred years ago or so, messages could only be sent by some form of noise, flare or beacon, or by actually transporting it. It was not until people learned how to send transmit messages by electricity that a whole new era in communications was opened up. A telegraph is an electrical apparatus for sending coded messages. The term was first applied to the semaphore of Claude Chappe. Experiments began on electric telegraphs after the discovery (1819) that a magnetic needle was deflected by a current in a nearby wire. In 1837 William Cooke and Charles Wheatstone patented a system using six wires and five pointers which moved in pairs to indicate letters in a diamond-shaped array. It was used on English railroads. In the same year Samuel Morse, in partnership with Alfred Vail, and helped by Joseph Henry, patented a telegraph system using Morse code in the US. The first intercity line was inaugurated in 1844. At first the receiver embossed or printed the code symbols but this was soon replaced by a sounding device. In 1858 Wheatstone invented a high-speed automatic Morse telegraph, using punched paper tape in transmission. In 1866 the first permanent telegraph cable was laid across the Atlantic. The TELEX system, using teletypewriters, became the most popular. In 1872, Jean-Maurice-Émile Baudot invented a multiplexing system for sharing the time on each transmission line between several operators.

Claude Chappe was a French engineer who, with his brother, Ignace, invented a semaphore telegraph in 1791. During the French Revolutionary Wars they used their telegraph on towers to relay information about the state of the war between France and Austria, this method being much faster than other existing forms of communication.

William Cooke was a British electrical engineer who collaborated with the physicist Charles Wheatstone to develop the first commercial electric telegraph in 1837. In 1845 they patented a single-needle apparatus.

Telegraphy is based on the sending of electrical impulses through wires. An electric current can easily be sent through a wire by a battery, and the duration of the current can be controlled by switching the battery on and off. The wires at the other end can be connected to a receiver – an electromagnetic instrument designed either to make a sound like a buzz or a click, to ring a bell, to alter the direction of a magnetic needle, or draw a line.

The first ever telegraph system was set up in London in 1837 by Charles Wheatstone. His earliest system was very cumbersome, using five different lines, and he soon replaced it with a single-line system. The receivers of these early systems worked by deflecting magnetic needles.

While these advances were being made in Britain, Samuel Morse was developing his own telegraph. In his apparatus, which was first used in 1844, the electric current worked an electromagnet that caused a pencil to mark a line on a moving piece of paper. By regulating the length of the electrical impulses, Morse was able to produce long and short marks. He invented a code in which combinations of these long and short marks, known as dots and dashes, represented the letters of the alphabet.

A simple telegraph set consists of a battery to provide the electric current, a wire or line to carry it to another place, a sending switch or 'key', and a receiving instrument. The current must return to the battery to complete the circuit, and it is often arranged for it to return through the earth. This is called an earth return.

The instrument which sends out the signal is called the transmitter. In a manual telegraph the impulses are controlled by the Morse key, a small metal arm with a contact at each end and a pivot at its center. When the key is pressed the contact at its front end touches another contact immediately below it on the base board, thus connecting the battery to the line, completing the circuit, and allowing current to flow to the receiver at the other end. When the key is not in use for transmitting, the contact at its rear end touches the contact immediately below it and connects to a receiver any signals being transmitted back along the line.

Early telegraph receivers had magnetic needles, which were deflected from a center line as each impulse arrived from the transmitter. But this meant that the person receiving the message had to watch the dial at the same time as writing down the message, and, as a result, these receivers were soon superceded by ones that emitted sounds. Short and long impulses on these are distinguished either by two different sounds or by the time that elapses between the sounds. Other receivers, like Morse's, draw dots and dashes with pens controlled by electromagnets.

Telegraph circuits were costly to install an d operate, and so man devices were invented to increase the message-carrying capacity of individual lines.

A rather different way of increasing the capacity of a telegraph line is to feed into it a number of electric 'current' currents of different frequencies. Telegraph signals can then be superimposed on each of these carriers. The signals can be sorted out by filters at the receiving end and then routed to separate receivers for decoding.

Telegraphy between cities, and between countries separated by sea, was usually carried out by means of land-lines and submarine cables. This method was obviously impossible for ships at sea, and was therefore replaced by telegraph signals sent by radio (radiotelegraphy). Radiotelegraphy is less affected by distortion than radiotelephony (voice transmission), and could therefore be used when distance or atmospherics make satisfactory radiotelephonic contact impossible.

A skilled operator using a Morse key could transmit about 40 words each minute. A telegraph line could handle many more, so a single line could carry a great many messages if transmission and reception were speeded up. This was done by automatic transmission.

Messages to be transmitted were first encoded on a narrow tape of paper. The early code was based on the Morse Code, and a simple device punched two lines of holes in the paper. Two holes, one immediately above the other, represented a short impulse or dot; two holes, with the lower one to the right of the upper, represented a long impulse or dash. The completed tape was fed through a transmitter operating at several hundred words per minute. Since the transmitter could deal with tape much faster than it could be prepared, several people could use a single transmitter and line. Equally fast machines were needed to receive and record the signals. These were chiefly reperforators that prepared from the incoming impulses tape exactly like that fed into a decoding machine that produced a second tape on which the message was printed in Roman characters.

Later most automatic transmission systems used tape punched with a five-unit code, two of the holes being above and three below a line of feed holes. This system was used chiefly for transmission in submarine cables and for teleprinter services. The tape was prepared on a machine with a keyboard like a typewriter, or on a teleprinter with a special attachment. On receipt it was decoded into words in a single step, either on to a ticker tape or on to a paper roll.

The teleprinter, or, as it was called in the US, the teletype writer, is an instrument used both for the transmission and the reception of telegraph messages.

The teleprinter had a keyboard much like a typewriter. When the operator pressed a key a code combination of five units representing the letter was sent down the line to the teleprinter at the other end. This signal caused the second teleprinter to select and print the same letter on a paper ribbon.

Teleprinters could transmit directly. It was also possible to record messages on a punched tape that could then be fitted to an attachment on the teleprinter. In this way a number of messages could be prepared in advance and then transmitted without a break.

The advantages of teleprinters were that they could receive messages when they were unattended at night, and that they provide permanent written records of business arrangements that have been completed with their aid.

In many countries special telegraph networks were available to connect teleprinters. Other systems connected teleprinters to each other through the ordinary public telephone exchange.