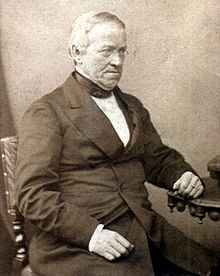 Charles Wheatstone was a British physicist and inventor. In 1843, he improved and popularized a device that accurately measures electrical resistance. Widely used in laboratories, it became known as the Wheatstone bridge. By 1837, he had invented an electric telegraph (with the help of Joseph Henry) before Morse. He also invented the stereoscope and the concertina, and coined the the term "microphone" for a sound magnifier.

A Wheatstone bridge is an electric circuit used for measuring resistance. It is named after Charles Wheatstone, even though it was actually invented by the British scientist Samuel Christie. Wheatstone was the first to use this device for its primary modern application: the highly accurate measurement of electrical resistance.

The Wheatstone bridge consists of four resistors connected in a square circuit. For the classic application of resistance measurement, three of the four resistors are variable resistors of known values. The fourth resistor is unknown. If a bridge voltage is applied from a to c, then the electric current flowing through the bridge is split, flowing through R1 and R2 on one side, and R4 and R3 on the other side. If a voltmeter is connected from b to d, then by adjusting the three known variable resistors until the voltmeter reads zero the bridge can be "balanced" with equal currents flowing through both arms of the bridge. In a balanced bridge the unknown resistance can then be calculated from the values of the known resistances.

In a modification of this application, bridge circuits are frequently used to provide an amplified, highly sensitive output from transducers, by using such transducers as one or more elements of a bridge.