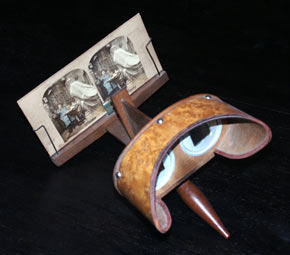 A stereoscope is an optical instrument that simulates binocular vision by presenting slightly different pictures to the two eyes so that an apparent three-dimensional image is produced. The simplest stereoscope, invented in the 1930s, used a system of mirrors and prisms (later, converging lenses) to view the pictures. In the color separation method the left image is printed or projected in red and seen through a red filter, and likewise for the right image in blue. A similar method uses images projected by polarized light and viewed through polarizing filters, the polarization axes being at right angles. The pictures are produced by a stereoscopic camera with two lenses a small distance apart. The stereoscope is useful in making relief maps by aerial photographic survey.