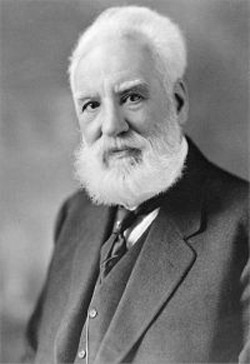 Alexander Graham Bell was a Scottish-American inventor of the first practical telephone. His career was influenced by his grandfather (who published The Practical Elocutionist and Stammering and Other Impediments of Speech), his father (whose interest was the mechanics and methods of vocal communication) and his mother (who was deaf). As a teenager, he was intrigued by the writings of German physicist Hermann von Helmholtz, On the Sensations of Tone.

At age 23 Bell moved to Canada. In 1871, he began giving instruction in Visible Speech at the Boston School for Deaf Mutes. This background set his course in developing the transmission of voice over wires. He cofounded Bell Telephone Co. in 1877. With his father-in-law, he re-established the journal Science (1882).He also devised the wax-cylinder phonograph and helped perfect the aileron for airplanes.