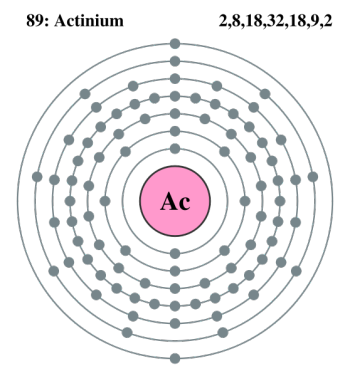 Actinium (Ac) is a silvery-white, radioactive, metallic element and first member of the actinide series; it is also a transition element in group IIIB of the periodic table. Actinium was discovered by Andre Debierne in 1899 and is found associated with ores of uranium; however, it is difficult to separate and is best prepared by bombardment of radium with neutrons. It is separated from other species by ion exchange or solvent extraction. Its most stable isotope, 227Ac, with a half-life of 21.8 years, is a decay product of uranium-235. Actinium glows blue and is oxidized in air.

Very few actinium compounds have been isolated because of the element's intense radioactivity. In its compounds actinium is tripositive, forming very similar compounds to lanthanum. Actinium salts are colorless.

An actinide is any member of the series of elements with atomic numbers from 89 (actinium) to 103 (lawrencium). The actinides are, in order of increasing atomic number: actinium, thorium, protactinium, uranium, neptunium, plutonium, americium, curium, berkelium, californium, einsteinium, fermium, mendelevium, nobelium, and lawrencium (see table below). Each actinide is analogous to the corresponding member of the lanthanide series. They are separated by ion-exchange chromatography.

The elements through uranium occur in nature; except actinium, they show valences higher than +3. The transuranic elements are synthetic; the +3 valence state becomes progressively more stable, and higher valences less stable.