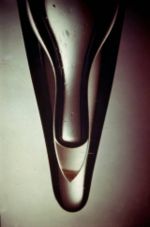 Americium (Am) is a transuranic, radioactive, metallic element and member of the actinide series. There are 18 known isotopes of americium, the most stable of which is 243Am with a half-life of 8.8 × 103 years. Americium is used in home smoke detectors and in industrial density and thickness gauges; 241Am is a source of gamma rays. Americium was first isolated in 1944 by Glenn Seaborg, Leon Morgan, Ralph James, and Albert Ghiorso at the University of Chicago. It is prepared by neutron irradiation of plutonium.