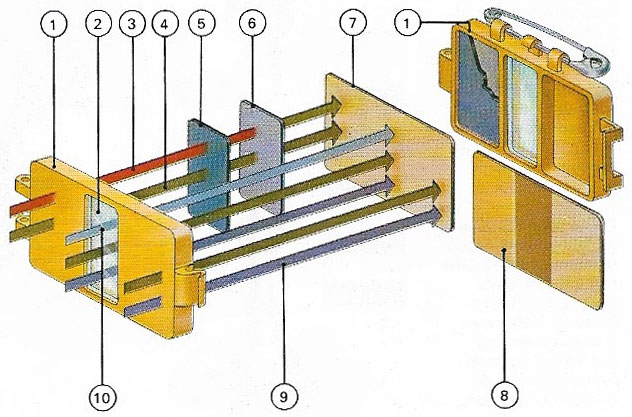 A film badge worn by those likely to be exposed radiation consists of a film (7) in a plastic holder of known absorption properties (1). A window(2) lets through all types of radiation. As neutrons (3) do not themselves affect film they are slowed by a lead filter (5) and absorbed by a cadmium filter (6)which emits a gamma ray for each neutron, blackening the film, Gamma rays (4) themselves penetrate all filters. X-rays(9) penetrate the plastic filter, whereas beta particles and other types of radiation (1))blacken the film through the window. The developed film (8) shows blackening.

Ionizing radiation is radiation that has enough energy to eject electrons from electrically neutral atoms, giving rise to charged atoms, or ions.

Ionizing radiation may consist of streams of high-energy particles or high-frequency (short-wavelength) electromagnetic radiation, including:

Neutrons are not themselves ionizing but their collisions with nuclei lead to the ejection of other charged particles that do cause ionization.

Ionizing radiation can have a particularly serious effect on biological tissues, although this depends much on the type of radiation and the extent of exposure.

An absorber is any material that is efficient at stopping ionizing radiation from passing through. Alpha particles are totally absorbed by a sheet of paper. Beta particles are absorbed by a few cm of plastic material or 1 cm of aluminum. Materials with a high atomic number and high density (e.g., lead, steel, and concrete) are used as absorbers of gamma rays.

Neutron absorbers such as boron, hafnium, and cadmium are used in control rods for reactors.