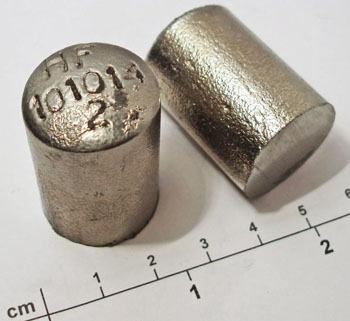 Hafnium (Hf) is a hard transition element in group IVB of the periodic table, found in ores of zirconium, which it closely resembles. Hafnium is used in nuclear reactor control rods.

Many years before its discovery in 1932 (credited to D. Coster and G. von Hevesey), hafnium was thought to be present in various minerals and concentrations. On the basis of the Bohr theory, the new element was expected to be associated with zirconium. It was finally identified in zircon from Norway, by means of X-ray spectroscope analysis. It was named in honor of the city in which the discovery was made (Hafinia is the Latin name for Copenhagen). Most zirconium minerals contain 1–5% hafnium.

Hafnium was originally separated from zirconium by repeated recrystallization of the double ammonium or potassium fluorides by von Hevesey and Jantzen. Metallic hafnium was first prepared by van Arkel and deBoer by passing the vapor of the tetraiodide over a heated tungsten filament. Almost all hafnium metal now produced is made by reducing the tetrachloride with magnesium or with sodium (Kroll Process).

Hafnium is a ductile metal (see ductility) with a brilliant silver luster. Its properties are considerably influenced by the presence of zirconium impurities. Of all the elements, zirconium and hafnium are two of the most difficult to separate. Although their chemistry is almost identical, the density of zirconium is about half of hafnium. Very pure hafnium has been produced, with zirconium being the major impurity.

Because the element not only has a good absorption cross section for thermal neutrons (almost 600 times that of zirconium), but also excellent mechanical properties and is extremely corrosion-resistant, hafnium is used for reactor control rods. Such rods are used in nuclear submarines.

Hafnium is also used in gas-filled and incandescent lamps, and is an efficient 'getter' for scavenging oxygen and nitrogen.