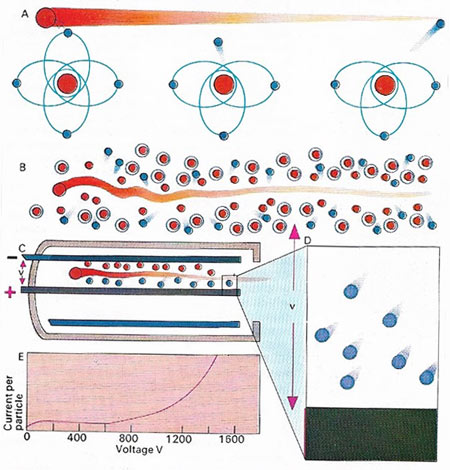 A high velocity particle passing through a gas knocks electrons off the otherwise neutral atoms (A). As it sweeps through the gas, it leaves behind a stream of free electrons (B), shown here in blue. If these break free with sufficient energy, they can knock other electrons out in a Geiger counter (C, D), subatomic particles enter the chamber where they are accelerated to produce more free electrons. These are attracted to the positive plate and are led from there to drive a meter or earphones. The current flow depends on the voltage v between the plates (E) The meter reading or frequency of clicks indicates the amount of radioactivity of the source. 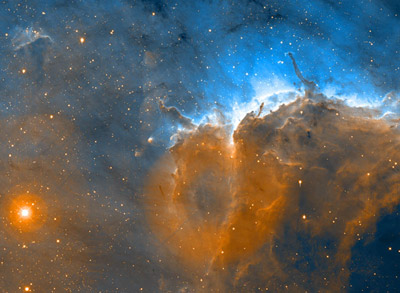 The light from young energetic stars is slowly transforming the Pelican Nebula's cold gas to hot gas, with the advancing boundary between the two being marked by an ionization front. Most of these bright stars lie off the top of the image, but part of the bright ionization front crosses on the upper right.

Ionization is the formation of ions by the removal or addition of one or more electrons from the outer parts of atoms. It occurs by ionizing radiation or if an atom suffers a sufficiently violent collision.

The stripping away of electrons can happen when atoms are exposed to short wavelength electromagnetic radiation as in the outer atmosphere of stars hotter than the Sun or in bright nebulas. Matter that has been completely ionized so that it is a mixture of bare nuclei and free electrons, as in the intensely hot interior of stars, is known as plasma. Some substances are made up of natural ions (for example, table salt – sodium chloride – contains Na+ and Cl- ions), held together by electrical attraction, which separate when dissolved in water, enabling the solution to conduct electricity.

Astronomers identify an atom that has lost a single electron by the Roman numeral II (the neutral atom, by I). In other areas of science, the superscript +. For example, neutral hydrogen is denoted HI and ionized hydrogen by HII or H+. Doubly ionized He (helium that has lost both electrons) is denoted by He III or He2+. Very high degrees of ionization occur in some astrophysical settings (e.g., very- high-temperature gases).

Ions that retain at least one bound electron can absorb or emit radiation, so producing spectral lines (emission and absorption lines) that differ in wavelength from those produced by neutral atoms. Photons are also emitted when an ion captures, or recaptures, an electron – a process called recombination.

Ionization equilibrium is the condition in a hot gas when the rate of ionization of a particular ion is balanced by the rate of recombination.

An ionization front is a transition region where interstellar gas changes from a mostly neutral state to a mostly ionized state. Ionization fronts are typically found in the vicinity of hot stars and define the extent to which stellar ultraviolet has ionized the material around them.