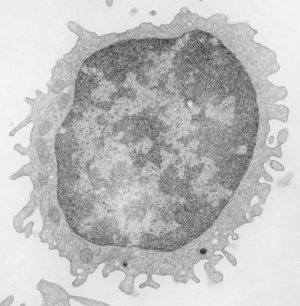 A lymphocyte is any of a group of leukocytes (white blood cells) present in blood, lymph nodes, the spleen, the thymus gland, the gut wall, and bone marrow. Vital to the adaptive portion of the immune system, lymphocytes mount a tailor-made defense when dangerous invading organisms penetrate the body's general defenses (such as those provided by other types of white blood cell).

Some lymphocytes retain a memory of invading microorganisms so that the invaders can be dealt with more rapidly when next encountered. It is this memory function that is stimulated by vaccines. Lymphocytes protect against the development of tumors and cause rejection of tissue in organ transplants.

Lymphocytes come in several varieties, the most common of which are B-lymphocytes, which make antibodies that attack bacteria and toxins, and T-lymphocytes, primarily responsible for cell-mediated immunity (i.e., attacking body cells themselves when they have been taken over by viruses or become cancerous).