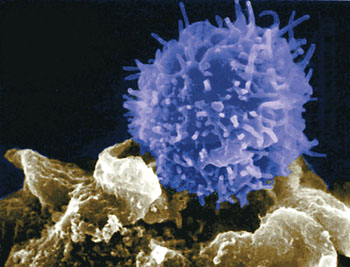 A T-lymphocyte, also called a T-cell, is a type of lymphocyte (which, in turn, is a type of white blood cell) which plays an important role in the immune system. T-lymphocytes are formed in the thymus gland and react highly specifically against the particular type of antigen that initiated their development. T-lymphocytes account for more than four-fifths of circulating lymphocytes.

There are three main groups of T-lymphocytes: killer (cytotoxic) cells, helper cells, and suppressor cells. The killer T-lymphocytes (like B-lymphocytes) are sensitized and stimulated to multiply by the presence of antigens, in this case by antigens present on abnormal body cells (e.g. cells that have been invaded by viruses, cells in transplanted tissue, and tumor cells). Unlike the B-lymphocytes, the killer cells do not produce antibodies; instead, they travel to and attach to the cells recognized as abnormal. The killer cells then release chemicals known as lympokines, which help destroy the abnormal cells. This is called cell-mediated immunity.