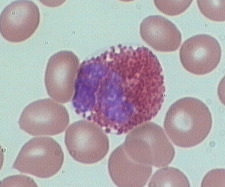 An eosinophil is an amoeboid scavenger leukocyte (white blood cell) that disposes of cellular debris. Eosinophils are capable of ingesting foreign particles, are often involved in allergic responses (see allergy), and may be involved in host defence against parasites. A mature eosinophil is 12 to 15 micrometers in diameter and has chromatin similar to that of a neutrophil, but within a nucleus that typically has fewer (2–3) lobes. The large coarse granules in the cytoplasm of an eosinophil, which stain orange-red with Romanowsky stains, make this the most readily recognizable cell in the blood. There are normally 40–400 × 106 eosinphils per liter of blood and are present in large numbers in lining r covering surfaces within the body.