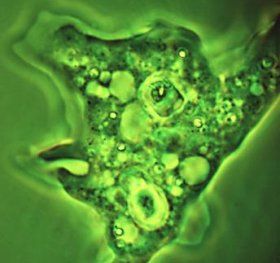 Endocytosis is a process whereby cells engulf and take in material that lies outside their cell membranes. Endocytosis involves the formation of a vesicle called an endosome from part of the cell membrane. The food is eventually engulfed into the vesicle, which then moves further into the cell where it meets a lysosome. Within the lysosome are digestive enzymes that break down the food.

Phagocytosis ('cell eating') is the process of engulfing and destroying extracellularly-derived material by a phagocytic cell, such as a macrophage, neutrophil, or amoeba. It is a form of endocytosis. In it, the cell changes shape by sending out projections called pseudopodia.

The phagocytic cell may be attracted to a particle like a bacteria or virus by a chemical attractant – a process known as chemotaxis. The phagocytic cell sends out membrane projections that make contact with the target particle. A receptor ligand interaction occurs between the phagocytic cell surface and the particle that will be ingested. Pseudopodia then surround the particle and, when the cell membrane of the projection meet, membrane fusion occurs. This results in the formation of a large intracellular vesicle. Lysosomes then merge with the vacuole, turning it into a digestive chamber. Finally, the products of the digestion are released into the cytosol.

Pinocytosis is the process by which a cell takes in extracellular fluid by the invagination of the cell membrane (Fig 2). Rather than entering and passing through the cell membrane as individual molecules, a droplet becomes bound to the membrane. A pocket then forms and pinches off to form a vesicle, which subsequently ruptures, releasing its contents into the cytosol. Pinocytosis ('cell drinking') is a form of endocytosis.

Receptor mediated endocytosis is an endocytotic mechanism in which specific molecules are ingested into the cell. In this specificity it differs from the other two forms of endocytosis, phagocytosis and pinocytosis. It works because of the presence of particular proteins in the cell membrane, known as receptors,which, when exposed to fluids outside the cell, allow only certain substances, called ligands, to attach to them. The cell-membrane region containing the receptor-ligand complex then undergoes endocytosis, forming a transport vesicle containing the receptor-ligand complex and excluding most other plasma-membrane proteins. Receptor-mediated endocytosis generally occurs via clathrin-coated pits and vesicles.