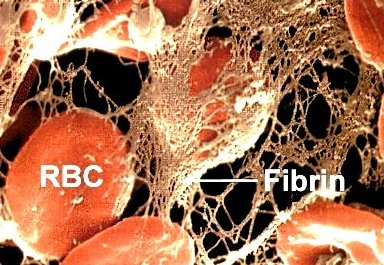 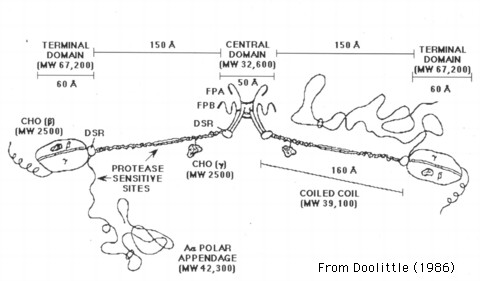 Fibrin is an insoluble, fibrous protein that is essential to blood clotting (Fig 1). Developed in the blood from a soluble protein, fibrinogen, fibrin is laid down at the site of a wound in the form of a mesh, which then dries and hardens so that the bleeding stops.

In addition to the coagulation system, blood contains a fibrinolytic (fibrin break-down) system, the end-product of which is an enzyme called plasmin, formed from a precursor called plasminogen. Plasmin acts directly to break down fibrin filaments and dissolve clots in a process by fibrinolysis.

Fibrinogen is a soluble protein, a coagulation factor, synthesized by the liver and released into the bloodstream (Fig 2). It is converted to fibrin by thrombin (an enzyme) in the final stage of the blood clotting process. The normal level of fibrinogen in the blood plasma 2–4 g/l (4–6 g/l during pregnancy).