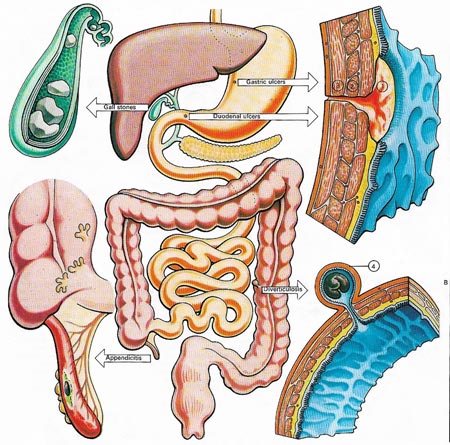 Fig 1. Five common disorders of the digestive tract are illustrated here. Ulcers of the stomach (gastric) or duodenum may penetrate the submucous coat (1), muscle layer (2), and finally perforate the wall (3). Gall stones occur in 5-10% of the population and may be precipitated by fatty foods. They are a classic disorder of the 'f's' – the fair, fat, forty, female, and family. They are often associated with gall bladder infections. If stones move out of the gall bladder they cause obstruction to the bile duct and biliary colic. Treatment is surgical removal of the gall bladder. Appendicitis can also demand surgery, it is an inflammation and infection of the appendix. Diverticulosis, or the formation of narrow necked, sac-like diverticulae, (4) commonly occurs in the colon. It is thought to be caused by weakening of the bowel wall and increased internal pressure due to lack of roughage. The diverticulae can become obstructed, infected and inflamed. 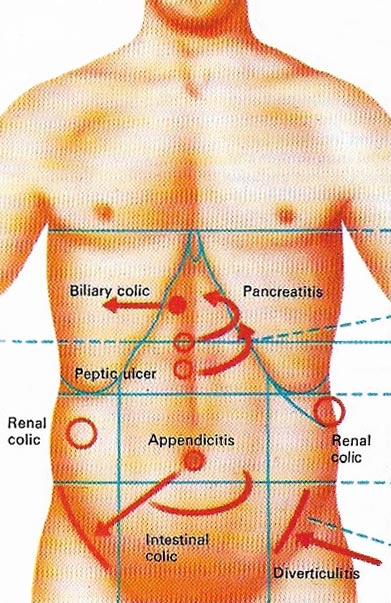 Fig 2. The acute abdomen is the name given to a group of disorders associated with abdominal pains. Some of them are shown here. The colics are pains that wax and wane in intensity. Intestinal colic can occur in food poisoning or intestinal obstruction. Biliary colic is not true colic but an intense, constant pain starting in the middle and moving to the liver. The pain from a perforated peptic ulcer or inflammation of the pancreas is persistent and "moves" to through the back. Appendicitis usually starts with a pain in the region of the umbilicus which moves to the area of the right groin. The pain of diverticulitis occurs in the left lower abdomen. 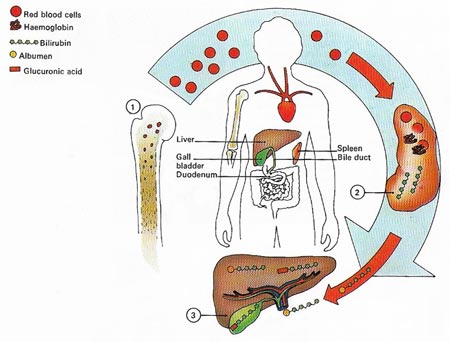 Fig 3. Excessive breakdown of red blood cells causes jaundice. Made in the bone marrow (1), the cells normally have a life of about 120 days before they are removed by the spleen (2). The red pigment haemoglobin is metabolized to bilirubin and carried to the liver (3) attached to the blood protein albumen. In the liver albumen is removed and replaced with glucuronic acid. This passes to the gall bladder and from there to the gut. It is excess of bilirubin that produces jaundice. 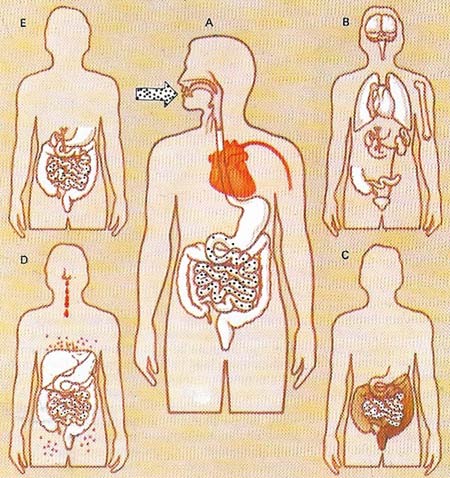 Fig 4. The bacterium salmonella causes intestinal infections that may vary from mild gastroenteritis to severe typhoid. Bacteria enter the body (A) from infected food or water and incubate for up to 14 days. In typhoid (B) disease affects many body parts. After incubation (C) diarrhoea ensues. Other features of typhoid (D) are nose bleeds and rose spots. Bacteria remaining after an attack (E) make a person a carrier. 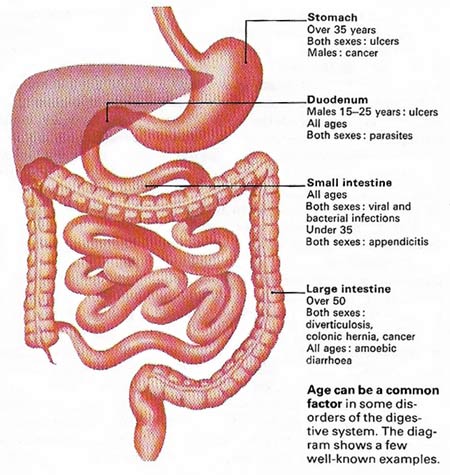 Fig 5. Age can be a common factor in some disorders of the digestive system. The diagram shows a few well-known examples.

Disorders and diseases can occur in any part of the gastrointestinal tract. "Indigestion" is something that nearly everyone suffers from occasionally but if it becomes frequent and persistent then the chances are that disease has affected the digestive system in the region of the esophagus, stomach, or duodenum or perhaps the pancreas, liver, or gall bladder (Fig 1).

The esophagus passes from the throat to join the stomach through an opening in the diaphragm to which it is loosely attached. From middle age this attachment weakens and part of the stomach can become "pinched" in the opening; this hiatus hernia is quite common. After a meal the acid contents of the stomach can reflux back into the esophagus causing pain and eventual ulceration. The pain, because of its position, is often called heartburn and is one of the symptoms behind the medical adage "if a patient complains of his heart, examine his stomach; if he complains of his stomach, examine his heart". The reflux may cause regurgitation of fluid into the mouth, probably after bending or straining. Occasionally surgery may be needed but the usual treatment consists of a weight-reducing diet plus advice on sleeping in an upright position.

The term "peptic ulcer" usually refers to an ulcer found at the lower end of the esophagus, in the stomach or in the duodenum (Fig 2). The cause of ulcers is thought to be increased secretion by the stomach of acid and the enzyme pepsin. This acid-pepsin mixture seems strong enough to overcome the normal protection of mucus in the stomach and "eats away the digestive tract lining. Alcohol, smoking, stress, and O group blood type are all associated with ulcers. The pain that an ulcer causes is usually felt centrally in the upper part of the abdomen. Its occurrence is related to meal times but often awakens a sufferer between 2 and 3 am, Taking food or antacids usually relieves the pain, as does vomiting.

The medical treatment of all ulcers involves relief of stress with rest in bed, a bland diet, the stopping of smoking and the administration of drugs such as antacids and compounds derived from liquorice root.

There are many disorders in which the major defect is malabsorption from the intestine of one or more of the minerals, vitamins or other essential foods. Malabsorption tends to be associated with weight loss, anaemia, diarrhea, and vitamin deficiencies.

Two of the most important malabsorption defects are celiac disease and Crohn's disease. Celiac disease is due to an inability to cope with an allergy to gluten, a protein found in wheat and other cereals while Crohn's disease is an inflammation of the end part of the small intestine (the terminal ileum) and is also known as regional ileitis. Crohn's disease can sometimes affect other parts of the small bowel and, rarely, the colon. Typical symptoms include abdominal pain, diarrhoea, loss of weight, fever, and anaemia. Medical treatment includes bed rest and a diet low in roughage.

Ulcerative colitis is an important disease affecting the large bowel. Its cause is a mystery but it involves inflammation that leads to ulceration. The rectum alone, or sometimes the whole colon, may be affected. Painful attacks of blood-stained diarroea are typical and in severe eases high fever, anemia, exhaustion, and collapse can occur.

The liver and gall bladder, organs vital to the orderly working of the digestive system, produce jaundice when they malfunction (Fig 3). Jaundice is a yellow discoloration, most noticeable in the skin, that arises when the amount of pigment bilirubin in the blood is above normal. Liver disease or the presence of gall stones in the gallbladder will cause this. The liver diseases hepatitis and cirrhosis are well known for causing jaundice. Cirrhosis, associated with excess alcohol intake, involves the replacement of normal liver cells with fibrous tissue.

Hepatitis is of three types and all are caused by different viruses. Infectious hepatitis has a relatively short incubation period (15–35 days) and like many infectious diseases is spread by droplets (as in a sneeze). Serum hepatitis has a longer incubation period of 40–180 days and is passed in blood transfusion. Both diseases cause inflammation of the liver cells and this prevents them from functioning normally and causes an excess of bilirubin which in turn causes the typical jaundiced coloration of the skin.

Apart from the hepatitis viruses, other micro-organisms can affect the digestive tract. Most virulent of these are the Salmonella or "food-poisoning" bacteria (Fig 4), which are also responsible for typhoid. Bacteria also cause the inflammation of the appendix and thus appendicitis. Other invaders of the digestive tract are amoebae and parasites such as roundworms and tapeworms. All these organisms can cause severe loss of weight and debilitation.