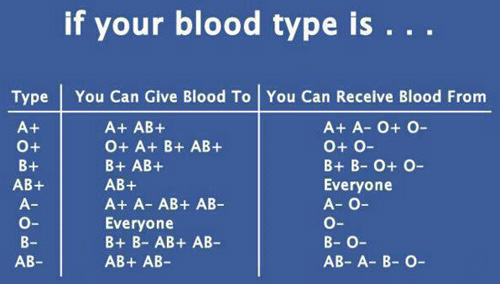 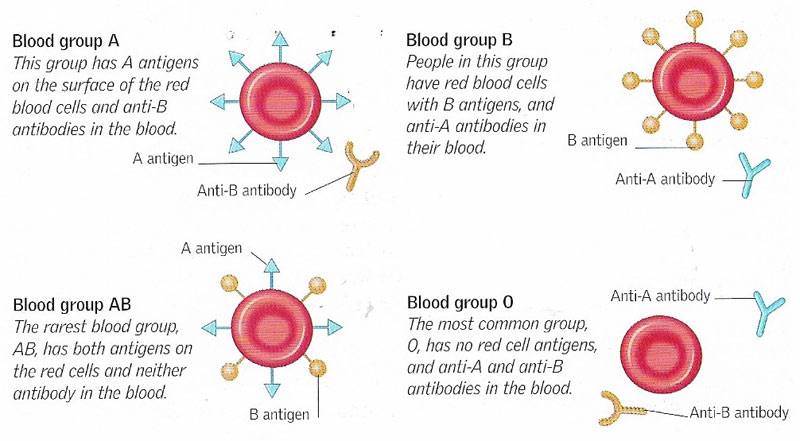 Blood groups, also called blood types, are the main varieties into which a person's blood may be classified, based on the presence or absence of certain antigens called agglutinogens on the surface of the red blood cells (erythrocytes). In the ABO classification system there are four main blood groups – A, B, AB, and O – whose blood cannot be mixed without causing clumping (agglutination) of their red blood cells. Blood of one group contains antibodies called agglutinins in the plasma that react against the agglutinogens on the cells of other groups. This incompatibility results in agglutination.

Proportions of the four groups within the population are very different in different parts of the world. From the point of view of blood transfusions, introduction of corpuscles containing agglutinogen for which the recipient has agllutinin must be avoided. The converse is not so important. Members of the population differ in other antigens carried on red blood cells (e.g. M and N antigens, forming M, MN, and N types); but since agglutinins for these are not normally present in plasma, they have not the same significance in transfusion though immunity to them may be acquired by repeated transfusion. Similar blood groups occur in other primates.

Another way of classifying blood involves the rhesus factor (Rh factor), so-called because it was first discovered in the Rhesus monkey. The rhesus factor is an antigen (there are actually several, closely related) occurring on the red blood cells of a high proportion of people (about 85% in the United States). The rest of the population is without the factor (Rh-negative).

Rh-negative individuals do not normally possess antibodies against the antigen they have not got (as they do in the ABO blood groups). But they can acquire such antibodies by blood transfusion or, in the case of a woman, by bearing Rh-positive children, whose antigen crosses the placenta. The antibody thus formed in a Rh-negative mother may cross the placenta again and if in sufficient concentration, which usually requires at least one preceding pregnancy with an Rh-positive child, it may damage a Rh-positive fetus.