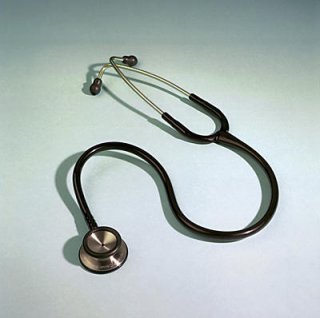 A stethoscope is an instrument that enables a doctor to listen to the action of various parts of the body, principally the heart and lungs, to help evaluate their condition. The practice of lastening to sounds within the body as an aid to diagnosis is called auscultation. The invention of the stethoscopein 1819 replaced the earlier method of placing the ear against the body.

The first person known to have used the method of tapping the chest (percussion method) was an Austrian called Leopold Auenbrugger. As a boy, he had often seen his father (an innkeeper) taping barrels to find out how full they were and, later, in the middle of the eighteenth century, he applied this method to the detection of chest diseases.

The lungs lie in a cavity surrounded by the ribs and the diaphragm. When breathing in, the diaphragm is lowered and the rib-cage expanded. Air then flows into the lungs to take up the extra space. A number of chest diseases cause the accumulation of fluid in the lungs or in the surrounding cavity. Tapping a healthy chest produces a clear hollow sound but a fluid-filled cavity produces a dull thud. Percussion is thus a very quick way of detecting some chest disorders.

The stethoscope is a very simple instrument but of great value to the doctor. It is merely a device for picking up sounds and vibrations (e.g. the heart-beat) made by the body organs, and conveying them to the ear. The modern instrument consists of a small funnel or a hollow drum attached to a forked rubber tube. Attached to the other ends of the fork are two ear-pieces through which the doctor listens, when the cup is put on the surface of the body.

For many centuries 'medical' men had listened to the heart beating by direct application of the ear to the chest but this was unsatisfactory and certainly unhygienic. Réné Laännec is credited with inventing the stethoscope in 1816. The story is that the stoutness of his patient made it impossible for him to listen to the heart, and so, remembering some children playing with a hollow log, he rolled up some paper and used it as an ear-trumpet. He was able to hear the heart more clearly than ever before. In 1819 Laännec published a book in which he described a wooden stethoscope he had constructed. The early stethoscopes were of this simple design but soon the two-ear-piece models were developed. It is ironic that Laännec should have died of tuberculosis – one of the diseases that the stethoscope has done much to detect.

The stethoscope was first used in studying the heart and lungs, and this is still its commonest use. It is, however, frequently used for detecting the pulse in the arm, and also for investigating abnormalities in the gastrointestinal tract.