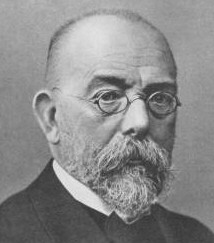 Robert Koch was a German medical scientist who is regarded as one of the founders, along with Louis Pasteur, of the science of microbiology. In a period of little more than a decade he and his assistants discovered the causative organisms of no less than eleven diseases.

Robert Koch was born in Clansthal in central Germany. After graduating with an M.D. at Göttingen in 1866 he went into practice, later serving in the Franco-German war as a surgeon. At Wollstein, where he was appointed medical officer in 1872, he began his studies of bacteria. Koch traveled extensively studying diseases such as cholera, malaria, and sleeping sickness in Egypt, New Guinea, and Uganda respectively.

His first great discovery was made in 1876 when he isolated the anthrax bacillus, and showed that it was the sole cause of anthrax, a contagious disease of sheep and cattle, which can also affect humans. Perhaps his most important contribution to bacteriology lay in his development of methods of growing or culturing bacteria, particularly that of using solid culture media such as agar jelly. Koch noted that the organisms in his cultures grew in clusters or colonies. After a time these became visible to the unaided eye. He realized that the colonies were characteristic for particular organisms.

In 1882, using new staining methods, he discovered the bacillus that causes tuberculosis, a disease in which he showed great interest. A year later he discovered the comma-shaped germ causing cholera, also showing how the disease was transmitted by drinking-water.

An institute for infectious diseases was built for Koch in Berlin in 1891 – he had been appointed Professor of Hygiene in the University of Berlin six years before. Many honors were bestowed upon him, including the Nobel Prize in 1905, and he died in 1910 leaving behind him a life's work rich in its results and of great benefit to humankind. Such distinguished bacteriologists as Emil von Behring (1854–1917), Richard Pfeiffer (1858–1945), and Friedrich Loeffler (1852–1915) were trained by him.