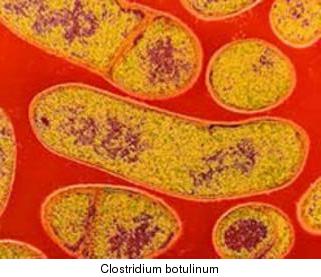 Botulism is a rare, life-threatening type of food poisoning caused by a toxin produced by the anaerobic bacteria Clostridium botulinum and C. parabotulinum, which normally live in soil but may infect badly canned food. The toxin, which is one of the most poisonous substances known, paralyzes the nervous system. Thorough cooking destroys both bacteria and toxin.

There are three kinds of botulism. Foodborne botulism comes from eating foods contaminated with the toxin. Wounds infected with toxin-producing bacteria result in wound botulism. Infant botulism is caused by consuming the spores of the bacteria, usually from honey. All three forms can be deadly and are medical emergencies.

Cases of foodborne botulism often originate with home-canned foods with low acid content, such as asparagus, green beans, beets, and corn. C. botulinum thrives in sealed containers because it is anaerobic, meaning it can survive and grow with little or no oxygen. Outbreaks of botulism, however, are often from more unusual sources such as baked potatoes wrapped in aluminum foil but not kept hot, and tomatoes.

Symptoms of foodborne botulism include

Symptoms usually begin within 18 to 36 hours after you eat contaminated food, but can occur in as few as 6 hours or as long as 10 days afterward.

A health care provider can use laboratory tests to identify C. botulinum toxin in blood or stool if a person is infected.

If a diagnosis of botulism is made early, the disease can be treated successfully with an antitoxin that blocks the action of the bacterial toxin circulating in the blood. Although antitoxin keeps the disease from becoming worse, it will still take many weeks for a full recovery. Your health care provider may try to remove any contaminated food still in the patient's gut by making them vomit or by giving them an enema.

If left untreated, botulism can temporarily paralyze arms, legs, trunk, and the muscles that help in breathing. The paralysis usually improves slowly over several weeks. People who develop severe botulism experience breathing failure and paralysis and need to be put on ventilators (breathing machines).