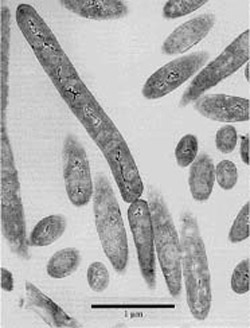 A bacillus is any of a large genus of Gram-positive (see Gram's stain), spore-bearing, rod-shaped bacteria. Bacilli are widely distributed in soil and air (usually as spores). Most feed on dead organic material and are responsible for food spoilage.

Note that the shape of the bacteria can be confused with the name of their genera. A capital "B" indicates the genus "Bacillus" while a small "b" indicates the shape (bacillus). Bacillus is a large genus with many endospore-producing species that are ever present. Some bacteria are not truly elongated, but can be kidney-shaped, curved (vibrios), or taper at each end (fusiform bacilli). These do not have the same arrangements as the cocci, but may be found in pairs (diplobacilli), or chains (streptobacilli). Bacilli may be single or adhere end to end to form chains. Some produce spores and some have flagella for locomotion. Certain species form a picket-fence pattern, which may look like a stack of wood (Corynebacterium diphtheriae).