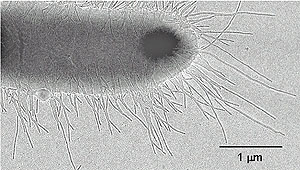 Pili on the surface of an Escherichia coli bacterium.

A pilus is a hollow, thread-like structure, many of which are present on some bacteria; pili are shorter than flagella and very thin (about 10 nanometers in diameter). They function in the adherence of bacteria to one another and to animal cells, as tools for grabbing onto and manipulating objects at a distance, and as tactile and sensory structures. They also serve in the formation of cytoplasmic bridges along which DNA can pass between bacteria during conjugation. This is a rare, but important event with profound implications for bacterial evolution. Bacteria are not very fastidious about who they exchange DNA with. Thus genes can be acquired from unrelated bacteria, and even from non-bacteria. For this reason, "lateral inheritance" of genes from unrelated organisms is quite frequently observed in bacteria.

Pili are as diverse in structure as they are in function. Typically the backbone of the pilus is made up of a long chain protein or polysaccharide chain with some type of functionally specific arrangement at the tip. One function of clinical interest is cell-to-cell recognition. The complex array of carbohydrates in and on the pili are the method by which bacteria recognize other cells, and are recognized by them.