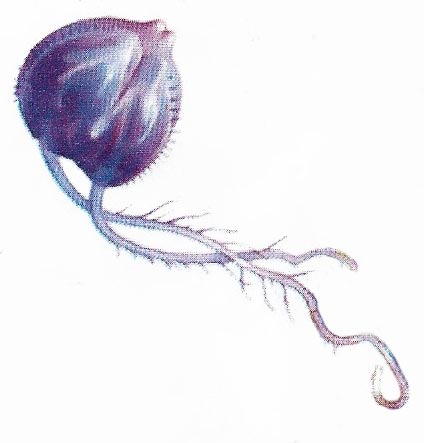 The sea gooseberry, Pleuroprachia, is a member of the Ctenophora. It swims by co-ordinated beating of the rows of cilia that lie in eight bands stretching almost the whole distance from pole to pole. It has long tentacles that sweep the water for small animals. These are periodically wiped off near the mouth located at the lower pole. Sea gooseberries are common in coastal waters all over the world and may grow up to 3.8 cm (1.5 in) in diameter.

Members of the phylum Ctenophora, the comb jellies, are exclusively marine, gelatinous animals that are characterized by the presence of eight rows of comb plates which bear cilia used for swimming. They are hermaphrodites, producing both eggs and sperm. They are also carnivorous, catching their prey with a pair of branched tentacles. Ctenophorans were once classified with cnidarians (phylum Cnidaria), but are now considered to represent a separate phylum. Well-known examples are often called sea gooseberries or sea walnuts.