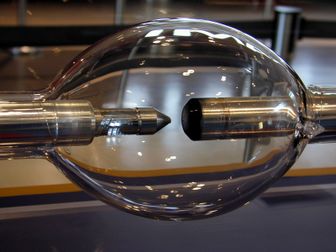 An arc lamp is an intensely bright and comparatively efficient form of lighting used for lighthouses, floodlights, and spotlights. It was invented by Humphry Davy in 1809. In the original version of the device, an arc discharge was set up when two carbon electrodes at a moderate potential difference (typically 40 volts) are "struck" (i.e., touched together then drawn apart). The light was emitted from vaporized carbon ions in the discharge.

In modern arc lamps, metal and oxide electrodes are typically used, and the arc is enclosed in an atmosphere of a high-pressure inert gas, such as xenon or krypton, or mercury vapor, which becomes luminous during arcing. Developed in Germany during World War II for use in high-powered search lights, the particularly bright and penetrating xenon arc lamps are now used in a variety of scientific instruments, such as spectrophotofluorometers, and IMAX theaters. See also electric arc.