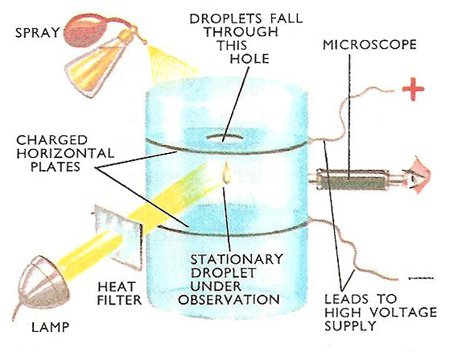 A simple diagram of the apparatus used by Millikan in his oil-drop experiments.

Robert Millikan was an American physicist awarded the 1923 Nobel Prize in Physics for his determination of the charge on a single electron (the famous oil-drop experiment) and his work on the photoelectric effect. He also studied and named cosmic rays.

Millikan was born in Illinois. After studying at Oberlin College, Columbia University, and at Berlin and Göttingen, he became professor of physics at the University of Chicago. He was also an inspired teacher and writer on the wider aims of science.

The name of Robert Millikan will always be linked with the study of electrons, the tiny negatively-charged particles which sweep round the nucleus of every atom. From 1910 onwards he carried out a series of ingenious experiments in which he sought to measure the charge on an electron and to confirm that this is the 'smallest possible' charge.

Millikan's experiment consisted of injecting droplets of oil from a kind of scent spray into the space between two parallel horizontal metal plates. The plates were connected to the terminals of a high-voltage electrical supply so that one was positively charged. The droplets were brightly illuminated (through a filter which cut out heat rays which might otherwise set up convection currents) and observed through a horizontal microscope. While passing through the jet of the spray most of the droplets had become electrically charged by friction. In other words each droplet had either gained or lost a few electrons. Droplets which had failed to do this could be charged by aiming a beam of X-rays at them.

Because the droplet was charged it would be attracted either upwards or downwards to the plate of opposite charge. Suppose it was attracted upwards. The force of attraction was adjusted very carefully by varying the voltage of the electrical supply until it exactly balanced the weight of the droplet. In this case the droplet, observed through the microscope, hung poised in mid-air. The force of attraction depends upon the distance between the plates, the voltage of the electrical supply (both of which are easily measured) and the charge on the droplet. Thus for a stationary droplet the charge could be calculated if the mass were known.

Finding the mass of a single droplet was the most difficult part of the experiment. The mass of any object is equal to the product of its volume and density. Millikan could find the density of the particular oil used in a number of ways and he could assume that his droplets were perfectly spherical. The volume of a sphere is given by the formula 4/3πr 3, where r is the radius. Hence it was necessary to measure the radius of a droplet to determine its mass. The eyepiece of the microscope was equipped with a scale, but this was not really accurate enough for measuring the tiny radius of a droplet. So Millikan had to find the radius by a roundabout method. He switched off the electrical supply so that the droplet fell under gravity. With the aid of a stop-watch he measured the steady speed at which it moved across his field of view. It moved with a steady speed because its weight was balanced by the resistance of the air through which it is falling. There is a very simple formula which connects the retarding force (air resistance) acting on a steadily moving sphere with its radius, and this gave Millikan the radius of the droplet he was investigating. At last Millikan had all the information he required to measure the charge of one oil droplet. He then repeated the experiment several hundred times and obtained a large number of different results. This did not mean that the experiment had gone wrong. It was merely that different droplets gained or lost different numbers of electrons. All the results were shown to be simple multiples (between 5 and 20 times) of one basic charge. This basic charge was the highest common factor of hundreds of results. No smaller charge was found in Millikan's experiments or any subsequent experiments. It is in fact the charge carried by a single electron. Every electron carries just this amount of charge, no more and no less. Millikan had measured with considerable accuracy one of the fundamental constants of the Universe.

Einstein and the photoelectric effect