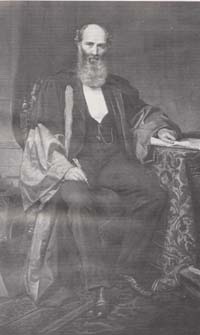 George Johnstone Stoney was an Irish physicist who coined the name 'electron' for the fundamental unit of electricity (later given to the negatively-charged elementary particle found inside atoms), did important work on the nature of the Sun, and applied the kinetic theory of gases to the analysis of planetary atmospheres, which had important implications for the habitability of other worlds. Using the kinetic theory, which treats gases as collections of randomly moving particles, Stoney was able to draw conclusions about which gases would tend to escape from the atmosphere of a given planet or satellite.

Beginning in 1870, Stoney presented a series of papers to the Royal Dublin Society in which he (1) accounted for the Moon's lack of atmosphere in terms of the low lunar gravity, (2) explained the absence of hydrogen from the Earth's atmosphere in terms of the high average velocity of hydrogen molecules, and (3) concluded that probably no water exists on Mars. It was not until 1898 that these results were published, together with other conclusions about the remaining objects in the Solar System, including that Jupiter can retain all known gases (see gas giant), whereas most moons and all asteroids are devoid of an atmosphere.