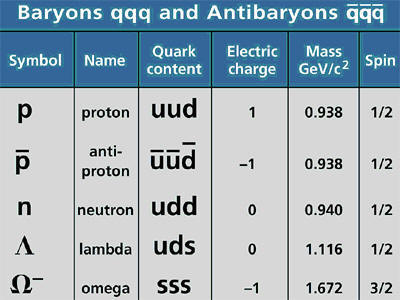 A baryon is any of the class of the heaviest subatomic particles that includes protons, neutrons, and other, more massive particles whose eventual decay products include protons. The name was coined in 1953 and comes from the Greek barys.

Baryons, which interact via the strong force and consist of a basic structure of three quarks, form a subclass of the hadrons and are subdivided into nucleons and hyperons. The ratio of the number of baryons to the number of photons (light particles) in the Universe, the baryon-to-photon ratio, which is about 10-9, is thought to have remained unchanged since the Big Bang.