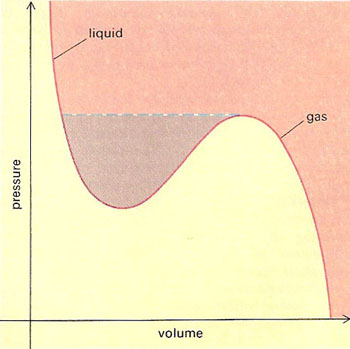 Graph of the van der Waal's equation for a real gas (red). If a quantity of gas is compressed at constant temperature under normal conditions, the red curve is not followed all the way: at a certain critical pressure a change of state occurs – there is a sudden reduction in volume and the gas liquefies (broken blue line). A whole family of related van der Waals curves exist for different temperatures in three dimensions these give rise to a pressure-volume-temperature surface. For a certain critical temperature, there is no well in the curve, only a point of inflection. At and above this temperature, there is no definable phase transition between the gaseous and liquid states.

Van der Waals force is an attractive force existing, at very short distances, between atoms and molecules of all substances. The force arises as a result of electrons in neighboring atoms or molecules moving in sympathy with each other. This force is responsible for the term a/v2 in van der Waal's equation of state. In many substances it is small compared with other interatomic attractive and repulsive forces present.

for a gram-molecule of a substance in the gaseous and liquid phases, where P = pressure, V = volume, T = temperature, and R = the gas constant. The term a/V 2 is a correction for the mutual attraction of the molecules, and b is a correction for the actual volume of the molecules themselves. (The values of the constants a and b depend on the particular gas in question.) The attractive forces between molecules are known as van der Waal's forces.