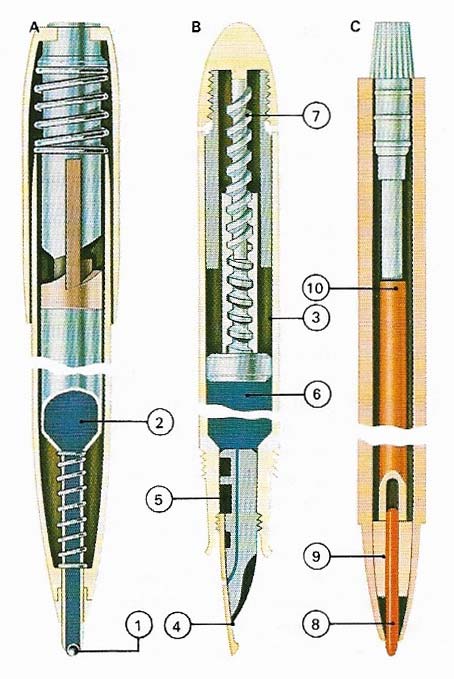 A pen is an instrument for writing with ink. The earliest pens were the Chinese brush and the Egyptian reed pen for use on papyrus. Quill pens, usually made from goose feathers, were used until the mid-19th century, when steel pens largely replaced them. The modern fountain pen was invented by L. E. Waterman in 1884; its nib is supplied with ink from a reservoir in the barrel by capillary action. In postwar years, the The ball-point pen and fiber-tip pen have become more popular for everyday use.

A pencil is an instrument for writing or drawing, usually consisting of a wooden rod with a core of mixed powdered graphite and clay. The mixture is extruded as a soft paste and placed in the grooves of two half-pencils which are glued together and dried. The term "lead pencil" comes from an early mistaken view that graphite is a form of lead. Pencils vary in hardness, the hardest (10H) containing the most clay, the softest and blackest (8B), the least. HB and F are intermediate grades.