How capillary action works. Two external forces act on a stationary liquid. One is the pressure of the air above the liquid, and the other is the attraction of the earth for the liquid – in other words its weight. Besides these, internal forces – cohesive forces – bind the liquid together. A molecule in the middle of the liquid is attracted equally by molecules on all sides, so that all the forces acting on it will tend to cancel each other. At the surface of the liquid, the upward attraction between water molecules and air molecules is negligibly small and does not balance the downwards force of the molecules below. This will tend to pull the surface down. It cannot move, because all available spaces below it are already full. So the surface is like a stretched piece of elastic, in a continual state of tension. This is called surface tension. Liquid molecules touching the glass are strongly attracted towards the glass, and the result of this attraction is that the water moves upwards, piling up at the sides of the tube. 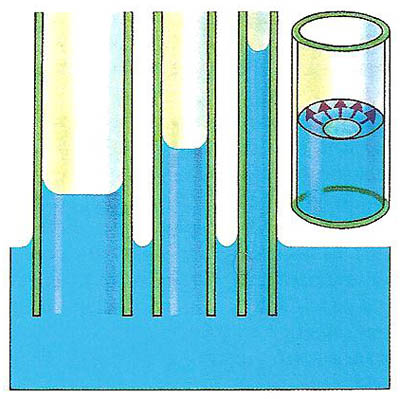 The cohesion between a liquid and a solid results in the liquid surface curving near the solid, to meet it at a definite angle. Water curves upward against glass, and the force of cohesion is exerted along the water surface, tending to lift it. The lifting force is proportional to the circumference of the water surface; in a narrow tube this force becomes powerful enough to lift a tall column of water. 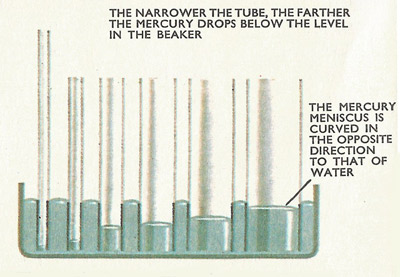 The level of mercury in the tubes drops below the level in the beaker.

Capillary action, also called capillarity, is the name given to various surface tension phenomena in which the surface of a liquid confined in a narrow-bore tube rises above or is depressed below the level it would have if it were unconfined. When the attraction between the molecules of the liquid and those of the tube exceeds the combined effects of gravity and the attractive forces within the liquid, the liquid rises in the tube until equilibrium is restored.

Capillary action is very important in nature, particularly in the transport of fluids in plants (see xylem) and through the soil.

Why does blotting paper soak up ink, or damp rise up a wall? Normally we expect liquids to flow downhill under the action of gravity. The force of gravity can be overcome and the liquid can be made to flow uphill by exerting a strong enough upwards force – for example in a hose pipe or a siphon or a lift pump. But ink flows upwards in a piece of blotting paper apparently of its own accord, with no external forces pushing it up. This effect of capillary action takes place in most porous substances (i.e. those which contain a great many tiny air spaces) such as blotting paper, or bricks and mortar. One of the best ways of observing it is to hold a lump of sugar so that it just touches the surface of a cup of tea – the lump is soon saturated as the liquid percolates through it.

A porous substance can be likened to a succession of tiny tubes of very fine bore, or capillary tubes. The diagrams below and to the right show what happens when capillary tubes (which must be open at both ends) are placed with one end in a beaker of water. The water rises up the tube to a certain height and then stops. The height to which the water rises depends on the bore of the tube – the narrower the tube, the higher the water rises.

Of course, it is nonsense to suggest that there is no upwards force acting on the liquid – before anything can move it must first be acted on by some kind of force. The water is in fact moved upwards by attraction between the molecules which constitute the glass wall of the capillary tube and the molecules of water.

Any solid or liquid is bound together by strong attractive, or cohesive, forces between its molecules. These act over a very short distance, so a molecule will influence only the molecules around it. When a molecule is in the middle of the liquid, it is attracted fairly equally by molecules on all sides, so that all the forces acting on it will tend to cancel each other out. Molecules next to the glass wall will be attracted in towards the rest of the liquid by the water molecules (this is a cohesive, or sticking together force) but they will also be attracted away from the rest of the liquid by glass molecules in the wall of the tube. This is called an adhesive force. The adhesive force exerted by the glass wall is the greater, and the glass immediately above the water surface attracts water molecules straight upwards. Nearby water molecules will follow, because of the strong cohesive force between them. This process continues, filling up the space below the surface as the water is pulled higher and higher. It continues to rise until the upward attractive pull is equal to the downward pull of gravity acting on the column of liquid. Water tends to pile up at the sides rather than in the middle, giving a characteristic dipped surface, or meniscus.

Water rises farther up a narrow tube because, for a given weight of water in the tube, there is a larger glass-to-water surface area over which the upwards attractive forces can act. In many substances, the attraction between the solid tubes in the brick or the blotting paper or the sugar lump and the liquid (the water or ink or tea) is greater than the attraction between the liquid molecules themselves. So the liquid is able to rise up the tubes.