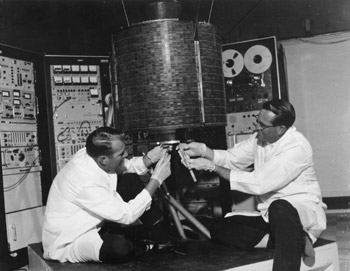 Early Bird, also known as Intelsat 1, was the world's first operational geostationary communications satellite. It was launched in 1965 and provided 240 telephone channels from its station over the Atlantic at a time when transatlantic cables only provided 412 channels.

Early Bird was also the name of a commercial Earth resources and reconnaissance satellite owned by EarthWatch of Longmont, Colorado. Images from Early Bird – the world's first private "spy" satellite – were to have shown detail as small as three meters across and been available to anyone for a fee of a few hundred dollars. However, contact with the spacecraft was lost shortly after its launch on December 24, 1997, by a Start 1 rocket from Svobodniy into a 479 × 488 km × 97.3° orbit.