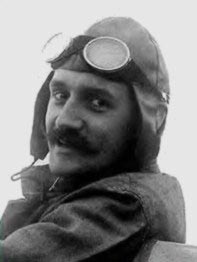 Robert Esnault-Pelterie was a French engineer and aviation pioneer who, among other things, was the first to use ailerons on an aircraft, invented the joystick and a new type of fuel pump, and built the first monoplane with a radial engine.

Early on, Esnault-Pelterie built a copy of the glider made by the Wright brothers in 1902. However, he distrusted their steering technique and so he invented the aileron (a movable airfoil at the edge of the wing), which he controlled using a hand-operated wheel. Used symmetrically, the ailerons provided longitudinal stability; used differentially, they controlled lateral stability. In 1907, he built one of the first monoplanes, the REP-1, most noteworthy for its innovative 7-cylinder radial engine. It was also first plane with a completely enclosed fuselage.

Esnault-Pelterie also tested many liquid-propellant rocket engines, including some that used cryogenic fuels, and put forward ideas for long-range ballistic missiles which won him support from the French Army for his rocket experiments. In 1930 he published his fundamental work, L'Astronautique,1 and in 1935 a sequel, L'Astronautique-Complément.2 A crater on the Moon's farside is named after him.