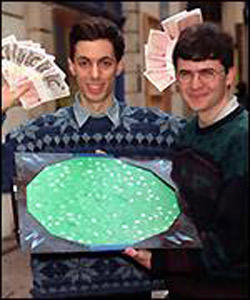 Winners Selby and Riordan of the $1 million prize.

The Eternity puzzle was an enormously difficult jigsaw consisting of 209 pieces, each one different and each made from a unique configuration of equilateral triangles and half-triangles with the same total area as six triangles. The puzzle was to fit them together into an almost-regular 12-sided figure aligned to a triangular grid. The puzzle's inventor, Christopher Monckton, announced a prize of $1 million when the puzzle was released commercially in June 1999, to go to the first correct solution submitted, assuming there was one, when all the solutions were opened in September 2000. Monckton had run computer searches on much smaller versions of the puzzle, which had convinced him that the sheer size of Eternity would make it intractable. However, the prize was won by two British mathematicians, Alex Selby and Oliver Riordan, with the help of a couple of computers, who sent in a correct tiling on May 15, six weeks ahead of the only other puzzler known to have found a correct solution.

Early on, Selby and Riordan made a surprising discovery. As the number of pieces in an Eternity-like puzzle increased, so did the difficulty – but only up to a point. The critical size is about 70 pieces, which would be almost impossible to solve. For larger puzzles, however, the number of possible correct solutions increases. In the case of Eternity itself, with its 209 pieces, there are thought to be at least 1095 solutions – far more than the number of subatomic particles in the universe but far, far less than the number of non-solutions. The puzzle itself is much too large to solve by an exhaustive search but not, as it turns out, by more savvy methods that take into account what shaped regions are easiest to tile and what shaped pieces are easiest to fit. By steadily refining their search algorithm, Selby and Riordan were able to prune out the vast majority of non-solutions and, with a bit of good fortune, to hit upon a correct solution and claim the prize.