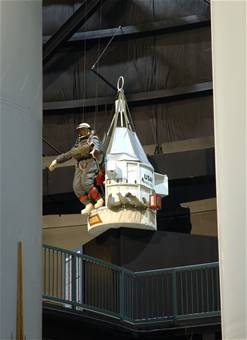 Excelsior gondola at the National Museum of the United States Air Force. (US Air Force photo).

Project Excelsior was a balloon project established in 1958 to study and solve high-altitude escape problems. As new jet aircraft flew higher and faster in the 1950s, the US Air Force became increasingly concerned with the hazards faced by flight crews ejecting from high-performance aircraft. The emerging Space Age introduced the problem of how to provide astronauts with a safe method of escape while within the atmosphere. Without proper stabilization, a crewmember ejecting from an aerospace vehicle at high altitudes could enter a life-threatening flat spin of up to 200 rpm.

Project Excelsior was set up with Joseph Kittinger Jr. as test director. Francis Beaupre, a technician at Wright Field working on the Excelsior Project, devised a parachute system that would safely enable pilots to eject from high altitudes. His system, called the Beaupre Multi-Stage Parachute, consisted of a stabilizer parachute that would prevent uncontrolled spinning and tumbling at high altitudes. A timing and altitude system automatically deployed both the stabilizing and main parachutes at the appropriate moments to ensure the safe and controlled descent of the pilot or astronaut.

As Project Excelsior didn't have the resources to use high performance aircraft to test the new escape system, a balloon gondola was designed and built by the staff at Wright Field to carry the pilot to the desired altitudes for the tests. The balloon held nearly 3 million cubic feet of helium to lift the open gondola high into the stratosphere. Kittinger made three high altitude parachute jumps from the gondola using the Beaupre-designed parachute system. On November 16, 1959, Kittinger made the first jump from Excelsior I at an altitude of 76,400 ft. During Excelsior II, the second test on December 11, 1959, he jumped from an altitude of 74,700 ft. On the third and last jump in Excelsior III on August 16, 1960, Kittinger jumped from a height of 102,800 ft, almost 20 mi above the earth. With only the small stabilizing chute deployed, he fell for 4 min 36 sec. He experienced temperatures as low as minus 94°F and a maximum speed of 714 mph, exceeding the speed of sound. The 28-ft main parachute did not open until Kittinger reached the much thicker atmosphere at 17,500 ft. Kittinger safely landed in the New Mexico desert after a 13 min 45 sec descent. Project Excelsior successfully proved the new parachute system would solve the problem of high altitude escape by crewmen.