A three-toed sloth in its natural habitat in the South American forest. It moves slowly among the branches, hanging by its hook-like claws. 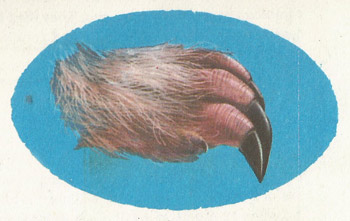 The fore-foot of an edentate, armed with large, strong claws. 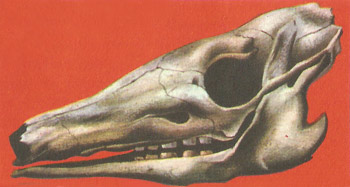 Skull of an armadillo. Note the small, peglike teeth. 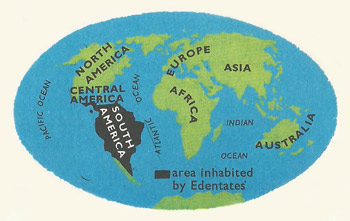 Distribution of the edentates. 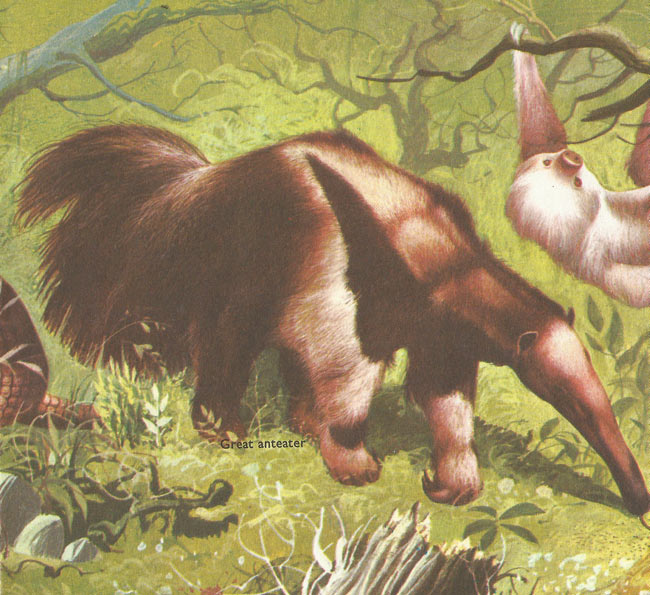 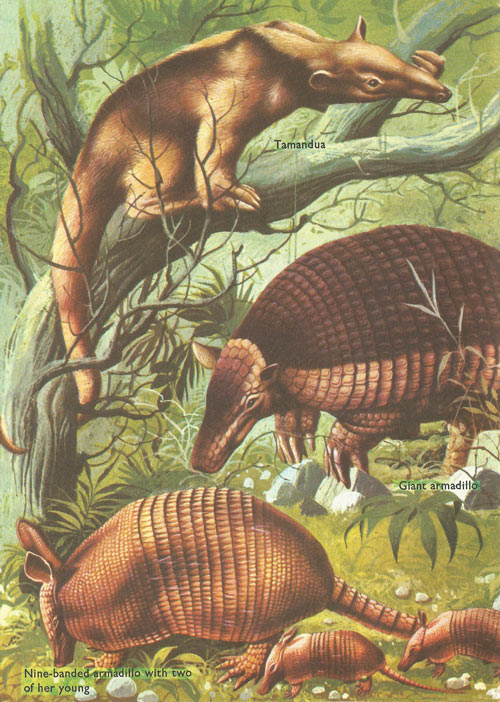 Tamandua, giant armadillo, and nine-banded armadillo. Not drawn to scale. 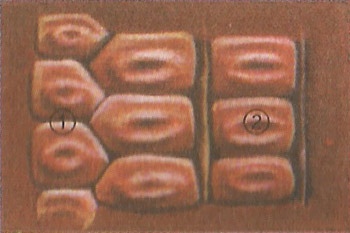 An edentate is a member of one of the four families of mammals making up the order Edentata. These four families are the anteaters, armadillos, two-toed sloths, and three-toed sloths. Edentate means "without teeth," but although the anteaters are completely toothless, the sloths and armadillos have primitive molars, and one species has more teeth than any other mammal except for some kinds of whale. Extinct edentates include the giant ground sloth (Megatherium, and the two enormous armadillos, Doedicurus and Glyptodon.

Less than 30 species of edentates are known. It is difficult to point to characteristics which they all have in common, to justify their being classified together, but numerous fossil species are known which provide links between the three existing types. The teeth of sloths and armadillos (anteaters are toothless) are peculiar in having no enamel or roots, and continue to grow as they are worn down. The feet of edentates always bear large, powerful claws, the third finger being usually the most strongly developed. The ground-living forms walk on the soles or sides of their feet; the sloths hang from the branches of trees by their hook-shaped claws.

One of the most constant features of mammals is that they have seven cervical or neck vertebrae. This is equally true of men, mice, giraffes, and even whales. But of the three species of sloth, one has the typical vertebrae; the second, six; and the third, nine.

The edentates are almost entirely confined to South and Central America; only one species, the nine-banded armadillo, extends into the southern states of the United States. All three types – sloths, anteaters, and armadillos – are found from southern Mexico to Argentina. Sloths and tree anteaters inhabit only forest; the others, open country also.

This is the largest of the edentates, and grows to a length of well over 6 ft, including its bushy tail. Its fore-legs are very powerful and are armed with enormous claws, used for digging and tearing open the nests of ants and termites. They also serve as formidable weapons, and it is said that even a jaguar will not attack a fully grown anteater. When it feeds, the animal pokes its long muzzle into the ants' nest, puts out its foot-long, sticky, worm-like tongue and licks up the ants. It licks up a lot of earth as well, but this seems to aid its digestion. The young are born singly, and the baby rides on its mother's back for several months after birth. The great anteater is found, both in forest and more open country, in Central America and tropical South America.

This animal is much smaller (3 to 4 ft long) than the great anteater and has shorter fur. Its tail, instead of being bushy, is long and prehensile – that is, it can be curled round a branch and used as a fifth limb for climbing. Tamanduas do come down to the ground, but they spend most of their time climbing about among the trees. They feed by tearing open homes of ants and termites that nest among the branches.

Three-fingered sloth would be a be a better name for this animal, as its name refers to the digits of the fore-limbs. All the fingers and toes of each limb are enclosed in a sheath of skin, so that the claws appear to be growing out of the feet. The ai is about 20 in long including its stump of a tail. Only one minute baby (about the size of a man's thumb) is born at a time. The mother carries her baby about for some weeks after birth. A curious feature of all the sloths is that the hairs of their fur are covered with little pits, in which a peculiar type of microscopic plant or algae grows; if the animal is heavily infested with these algae its fur looks green. The ai has another strange parasite - a small moth which lives and breeds in its fur. The ai feeds on the flowers and fruit of one particular kind of tree, called the Cecropia.

The auau's 'toes' are again really fingers. It is a little larger and more active than the ai. Its teeth are also different from those of the ai, which are all small; the front pair in each of the unau's jaws are longer than the rest and very sharp, resembling canine teeth. The unu is less restricted in its diet, and in captivity will eat fruit and vegetables. is species is confined to Brazil, but a similar sloth, Choloepus hoffmanni, is found from Ecuador to Costa Rica.

This armadillo is about 3 ft long, including its tail. Its fore- and hind-quarters are covered by shields, formed of little plates of bone lying close together, and the middle part of its body is protected by 9 hinged bands of similar bony plates. Most armadillos have armor built on this plan, which gives the body some degree of flexibility. Nine-banded armadillos live in burrows in dry or semi-desert country, and come out mostly at night. This is the only species that extends northwards into the United States, and it is sometimes called the Texas armadillo. The female nearly always has four young at a time, and these are always of the same sex; they are, in fact, 'identical quadruplets', bearing the same relation to each other as human identical twins do. Their shells are soft at first, and do not harden until they are nearly a year old.

This is the largest of all the armadillos, measuring between 4 and 5 ft long, including its tail, and weighing 120 lb or more. In spite of their size, giant armadillos are quite active, and can walk on their hind feet and even stand upright. They have five flexible bands round the middle of their bodies, and curl up into a ring when sleeping or resting. They have more teeth than any other mammal – 25 in each upper jaw and 22 to 24 in each lower jaw, making nearly 100 in all. These teeth are small and weak, however, and suited only to the animals's usual diet of insects. The giant armadillo is found in Brazil in the forests of the Amazon basin.

This is by far the smallest of all the edentates, being only 6 in long. Its armor consists of about 20 pinkish-colored transverse bands, and its face and underparts are covered with light-colored hair. The hind end looks as of it had been cut off square, giving the little animal a very strange appearance. Fairy armadillos feed on insects, for which they burrow, rather like moles. They are found in the drier parts of Bolivia and western Argentina.

This is a small species, about the size of a rabbit, and has three flexible bands of armor plates, This and two other species of the genus Tolypeutes are the only armadillos that can curl up into a ball so that the soft parts of their bodies are completely protected. Aparas dig in search of food, but do not live in burrows, and they run actively on the tips of their claws. They are found in the open pampas country of Argentina.


Edentates of the past

None of the animals described is of any great size, but in the fairly recent past there were enormous edentates in South America. The megatherium or giant ground sloth was a big as a elephant. Some kinds of large ground sloths were alive when primitive man first came to the country.

The living species of edentates are divided into three very distinct families.

Anteaters (Myrmecophagidae).Three species are known. The largest is a ground-living animal and the other two climb among trees. They feed on ants and termites.

Sloths (Bradypodidae). Three species, all living entirely among trees, hanging upside-down by their hooked claws. They feed on leaves and fruit.

Armadillos (Dasypodidae). About 20 species. They are the only mammals which have bone developed in the skin, and this forms an armor of bony plates. They feed mainly on worms, snails, and insects.