Fig 1. A herd of elephants making their way through the forest; they break down bushes and small trees with ease. 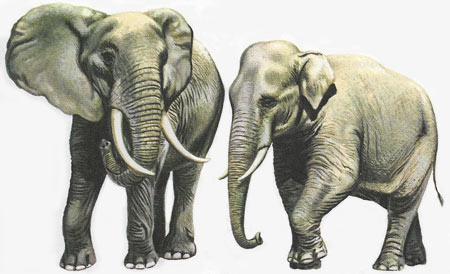 Fig 3. A large African elephant measures 26 et from tip of trunk to tip of tail, 7 ft from trunk to eye, and 16 in width of hoof. It may weigh over 5 tons.

Far away in the forest a crashing noise is heard, and an occasional burst of brassy trumpeting. Nearly all animals move silently, but elephants have no need to do this. They are not hunters themselves, and nothing hunts the elephants, except man with his rifle or poisoned arrow; but the behavior of wild animals in not adjusted to the presence of man.

Here they come, walking quite slowly in single file. An old cow (female) is the leader, and other cows, some with little calves, follow her; the males are in the rear. (If danger threatens, the males will quickly come to the front to protect the herd.) The elephants avoid large trees, but if bushes or saplings are in the way they simply push them over, which accounts for the loud crashing and snapping that accompanies their progress.

Now they have reached an abandoned forest clearing, where the vegetation is fresh and green, and they scatter to feed. The grown-up elephants pull down great bundles of leaves with their trunks and stuff them into their mouths; the calves play around just like most other young animals, squealing and chasing each other. After their meal they all set off again, this time making for a river, where they will drink and bathe. They spend about 16 hours a day searching for food, and sleep for only three or four hours out of 24.

Sometimes the herd will be accompanied by an old bull (male), but as a rule these old male elephants lead solitary lives, only visiting the herd occasionally. If one of the younger males is approaching maturity there may be a battle. Old males driven away from their herds in fights of this kind can become very bad-tempered and dangerous.

The elephant's trunk is one of the most remarkable organs found in the animal kingdom. It is formed of the upper lip and snout, and the nostrils are at the end of it. The elephant has a keen sense of smell, and will hold its trunk up to catch a scent carried on a breeze. It can be filled with water, to be squirted into the mouth or over the animal's body – or with sand, if the elephant wants a dust bath. It is immensely strong and can pull up small trees by the roots. It is also a very sensitive organ, and with the tip of its trunk an elephant can take a lump of sugar from a child's hand. For such delicate operations the elephant uses one or two finger-like appendages on the tip of its trunk.

The elephant has a single pair of incisor teeth in the upper jaw, and a set of molars in both upper and lower jaws; there are no canine teeth. The incisors are the well-known tusks, which continue to grow throughout the animal's life, although as they grow they are worn down by use. There is usually only one large molar tooth at a time on either side in each jaw. These teeth have a structure of hard ridges set in softer material which work like files, grinding up the vegetable food. As each tooth wears out it is replaced by the one behind it, which grows forward. The tusks are used for rooting in the round for food, and also for fighting.

The Asiatic elephant (Elephas maximus) and the African elephant (Loxodonta Africana) are the only living representatives of the order Proboscidea (animals with a proboscis). In past times there were many other kinds of elephants, including the well-known woolly mammoth, which lived in the Ice Age, and the The nearest living relatives of the elephants are the hyraxes or coneys, which live in northern Africa. They are little rabbit-sized animals, about as unlike an elephant in appearance as it is possible to imagine.

The two living species differ in the following ways.

The tracks of an elephant in soft earth look like deep, round holes, a foot or more in diameter. The marks of the nails or hooves are just visible at the front of the footprint. The toes are held together by elastic tissue, and the legs are like straight columns, an adaptation for supporting the animal's enormous weight.

Elephants also ruthlessly hunted for their tusks. especially in Africa. The rate of poaching is such that, at present rates, the African elephant may be extinct in the wild within a few decades.

In Asia elephants were traditionall domesticated and used for riding, especially on ceremonial occasions, and for various other kinds of work.