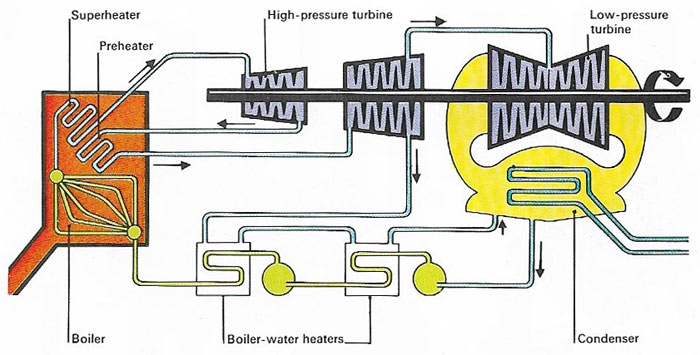 Fig 1. A steam turbine uses steam from a boiler to drive the rotary blades of a series of turbines, each at a lower pressure than the one before it. Exhaust steam is condensed to water and re-used in the boiler.

Fig 2. In the four-stroke or Otto cycle, used in petrol engines, the expansion of gases forces the piston down in the cylinder. On the induction stroke (A) the descending piston sucks in fuel-air mixture through the inlet valve(1). On the compression stroke (B) both valves are shut. They remain closed when the spark plug ignites fuel and air during the power stroke (C) and the exhaust valve(2) opens during the exhaust stroke (D).

Fig 3. In a diesel engine a jet of fuel is sprayed into hot, compressed air at the top of the cylinder. The fuel ignites spontaneously and the expanding gases produced power the piston. On the induction stroke (A) air is drawn into the cylinder through the inlet valve (1). On the compression stroke (B) both valves are shut and fuel is injected. This burns on the power stroke (C) and the exhaust valve (2) opens during the exhaust stroke (D) to let exhaust gases out of the cylinder.

Fig 4. In a two-stroke engine the upstroke (A) opens the inlet port (1) and compresses the mixture already in the cylinder. A sparking plug ignites the fuel (B) and after combustion the descending piston(C) first opens the exhaust port (2) and then the transfer port (3), letting in fresh fuel-air mixture. In this way the piston also acts as the engine's valves and oil is added to the fuel to lubricate it. In many two-stroke engines, the cylinder is air-cooled via fins attached to it.

Fig 5. The Wankel engine has a rotor in the form of a curved triangle within a chamber. The "points" of the rotor have gas-tight carbon-fiber seals. The four stages of the cycle are the same in principle as the Otto cycle: induction (A), compression (B), combustion (C), and exhaust (D). All three spaces in the chamber are used at once. There are two sparking plugs and the rotary motion produced can be used as a direct drive, without the need for a crankshaft. 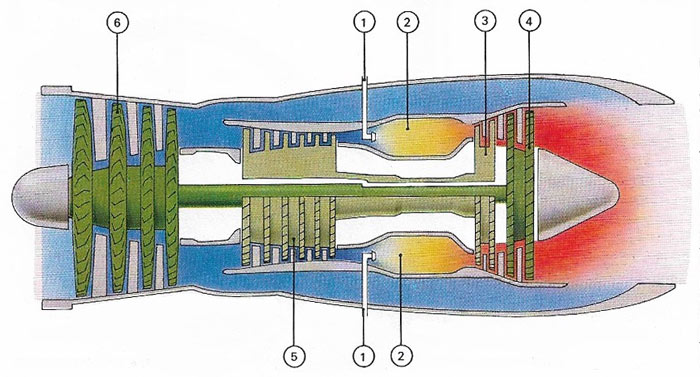 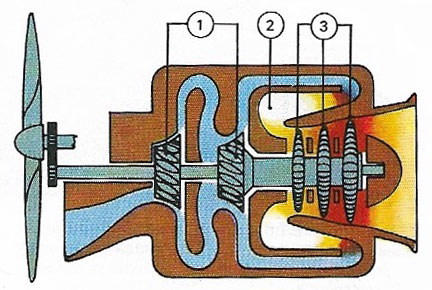 Fig 7. A turboprop engine is basically a gas turbine in which most of the power in the rotating shaft drives a propeller through reduction gears. Incoming air is compressed (1), mixed with fuel (2), and burned to rotate the turbine (3). A typical output is 2,000 hp.

An engine is a device for converting stored energy into mechanical energy, capable of doing useful work. Most engines in use today are heat engines, or combustion engines. which convert heat into work, though the efficiency of this process, being governed according to the second law of thermodynamics is often very low. Heat engines are commonly classified according to the fuel they use (as in gasoline engine), by whether they burn their fuel internally or externally, or by their mode of action (whether they are reciprocating, rotary, or reactive). They are distinguished from electric motors which, in providing their power, do not directly alter the chemical or physical composition of a substance.

The rules governing the way in which heat can be converted into work were discovered through experience by early Engineers. Later these rules were formulated as the science of thermodynamics. By using them it is possible to calculate how much power an engine will produce, what fraction of the heat will be turned into work, and what might be done to improve its performance.

The first engines invented during the eighteenth century, burned coal to produce steam in a boiler. The steam was then used to drive the engine. An engine of this sort, in which the source of heat is outside the engine, is known as an external combustion engine. An example of this type is the steam turbine is shown in Fig 1.

By far the most successful form of engine, however, is the internal combustion engine. In an engine of this sort fuel is burned and the expansion of gases produced is employed to drive a piston back and forth inside a cylinder and is transmitted via a crankshaft to drive the wheels.

The internal combustion engine was invented in the second half of the nineteenth century. The first successful design was produced by a German engineer, Nicklaus August Otto (1832–1891), who used coal gas as his fuel. Otto's gas engine used the four-stroke cycle first proposed in 1862 by Alphonse Beau de Rochas – and so called because only one stroke in four produces power. The other three are taken up in drawing in the fuel, compressing it and finally, after it is burned, exhausting it.

Since only one stroke in four produces power the output of a single-cylinder four-stroke engine is very uneven and requires a heavy flywheel to smooth it out. Most practical four-stroke engines have more than one cylinder – usually four or six, but often as many as sixteen. Increasing the number of cylinders produces smoother power because each cylinder is arranged to produce its power in turn.

The internal combustion engine using the four-stroke cycle is the engine found in almost all cars and trucks and many motor cycles. Such engines will run on gas but are normally fuelled with a liquid fuel, using petrol (gasoline). The fuel is tuned into a vapor , mixed with air in the carburettor, and ignited inside the cylinders of the engine by the sparking plugs which are timed to produce a spark at exactly the right moment in the four-stroke cycle.

Many internal combustion engines, including most of those used in modern commercial vehicles, employ a heavier petroleum fuel called diesel oil. This type of engine is named after the German inventor Rudolf Diesel (1858–1913). Instead of a carburettor to mix the fuel with air, diesel engine has a fuel injector which pumps a measured quantity of fuel into the cylinder at precisely the right moment. And instead of sparking plugs diesel engines depend on the compression of the gas in the cylinder to achieve ignition. As the pressure of a gas increases so does its temperature. In a diesel engine the fuel ignites spontaneously at the end of the compression stroke. For this reason a diesel engine is more correctly called a compression-engine engine.

Internal combustion engines do not convert heat into work efficiently. A typical car engine converts no more than a quarter of the energy contained in the fuel into useful work and even a highly developed engine is little better than 35 percent efficient. The explanation of this disappointing performance lies with the laws of thermodynamics.

The difficulties of designing a perfect engine mean that all actual engines fall well short of the theoretical efficiency. Friction, vibration, and the energy consumed by the engine itself in driving camshafts, fans, and so on, and losses in the transmission reduces the efficiency to much lower levels.