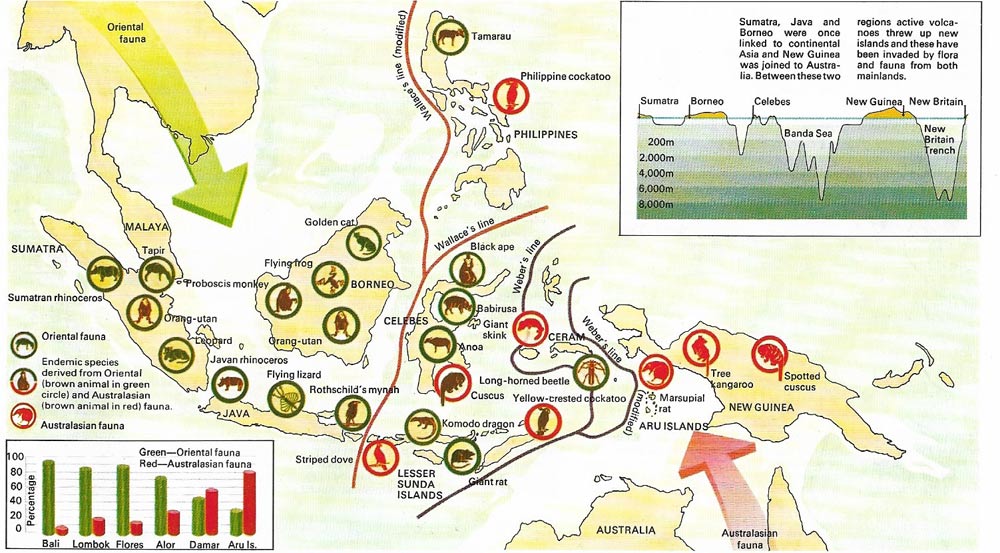 Natural barriers such as deep ocean channels separate the animals of the world into distinctive groups. These barriers have served as isolating mechanisms, keeping apart not only species but whole families of animals. One striking example is the juxtaposition of the flora and fauna of Southeast Asia and Australasia. The 19th-century biologist Alfred Russel Wallace (1823–1913) drew a dividing line where the fauna and flora of Southeast Asia was distinct from that of Australasia. This was later modified by naturalist Thomas Henry Huxley (1825–1895). Even later, the German biologist Max Weber drew a new line marking the point of balance between the two groups. Later he modified this to mark the sea channel that forms a barrier to the spread of land mammals. Between Weber's and Wallace's lines is an area of faunal mixing where animals and plants have managed to cross the channels separating the islands.

Fig 1. Adaptive radiation can be seen in cattle of Southeast Asia which, although related, occupy different environments. The gaur is found in the hilly forests, while the wild buffalo, ancestor of the domestic variety, roams the upland swampy areas. The banteng lives in Java, where it is sometimes domesticated. Yaks, also domesticated, are adapted to withstand the cold of Tibet and Central Asia. The small wild anoa lives in wet, hilly regions of the Celebes.

Fig 2. Zones that vary with altitude can lead to the formation of different habitats that are best exploited by different species of plants and animals.

Fig 3. Vegetation zones in mountainous regions may not always be uniform because the high land forces winds laden with moisture to rise. As they do so, the water they carry is dropped and they blow down the other side of the range as waterless, desiccating airflows. A zonal plan of Mount Kenya shows that, where the rainfall is less heavy, areas of scrub and dry land replace the montane forest that covers the north of the massif. This affects many animals that depend on particular kinds of vegetation for their food and shelter. 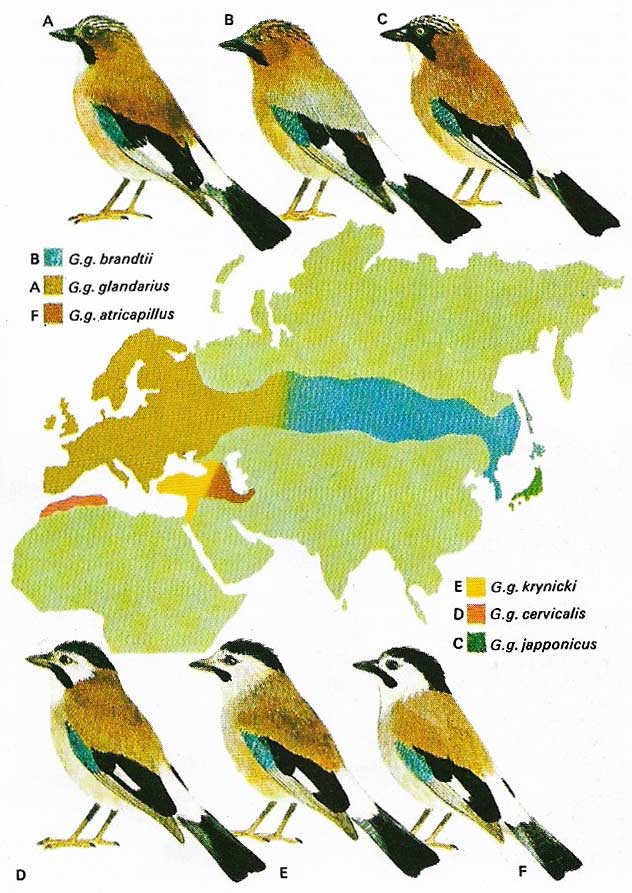 Fig 4. More than 20 recognized races of jay are found in Eurasia, ranging from Western Europe to the islands of Japan. The jay is primarily a bird of deciduous woodlands that feeds mainly on acorns wherever it can find them. But is a versatile feeder and can live on a variety of seeds, fruits, buds, insects, and even eggs and small birds. In some areas it had forsaken its usual habitat and has taken to coniferous forests, where it feeds on the seeds of certain pines. Many species of birds are widely distributed and show marked local variation in color of their plumage in different parts of their range. Where bird populations overlap, there is a gradual transaction of features from one race to another, as the different populations freely interbreed. These populations are regarded only as sub-species or races. The birds at the extremes of their ranges are unlikely to interbreed and they may in time become separate species. 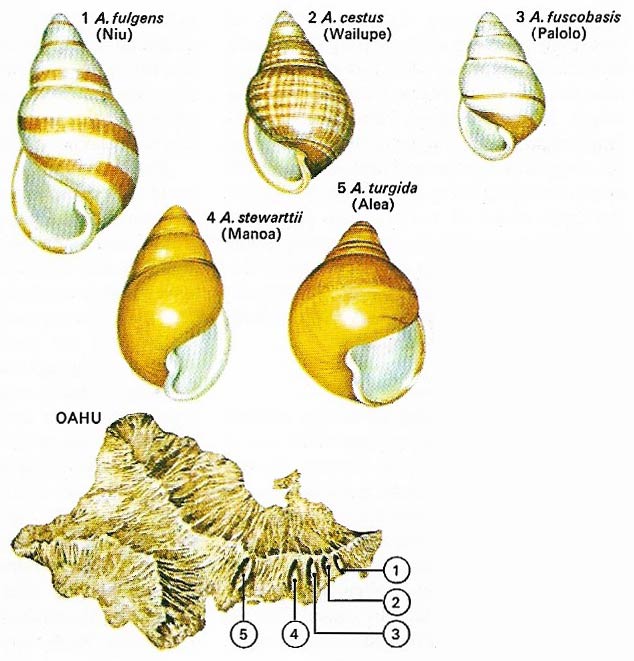 Fig 5. Many species of agate snail (Achatinella) live on the Hawaiian island of Oahu, most of them in a small area of adjacent valleys. Individuals remain close to their point of hatching. The rocky ridges that separate the valleys are an effective barrier to migration for theses relatively immobile animals. Over thousands of years the snails have been geographically isolated and, as a result, the species have remained quite distinct.

According to the theory of evolution, all living plants and animals have derived from one or two simple ancestral stocks. As a convenient labelling system, scientists have contrived to classify more than one million animals and half a million plants into separate species. This classification is first made on the basis of physical appearance and, in organisms that appear to be similar, is confirmed by the fact that they do not interbreed freely in the wild. So, although it is possible in captivity to breed a cross between a male lion and female tiger – a so-called "liger" – the lion and the tiger are nevertheless still classified as a separate species.


The development of species

How then did different species develop from a single uniform population? If we imagine such a population inhabiting a fairly large area and having a large gene pool, then the forces of natural selection will, in time, produce groups of individuals that are adapted to live in certain habitats. If new habitats become available groups of animals or plants will colonize them and adapt to exploit them fully. The original population will have undergone adaptive radiation (Fig 1).

The new groups may become distinct enough to be regarded as separate subspecies or races. Occasionally they may diverge farther from the parental stock in such a way as to prevent to decrease the ability to exchange genetic material. They then can be described as different species. By developing groups of specialist organisms, nature does not put all its "genes in one basket" and the presence of many specialist organisms ensures survival.

The most obvious barriers to reproduction – and often the first step in the process of specialization – is that of geographical isolation. This depends primarily on the habits and dispersal power of the species concerned. Birds have a large dispersal power but other creatures are limited in their range. Land snails on the Pacific islands, for example (Fig 5), inhabit wooded valleys that are separated from each other by rocky ridges. In the valleys the frequency of different species of snail varies and in some valleys particular species are wholly absent.

It seems that the original founders of the populations wandered quite by accident into one or more of the valleys and that the ridges between the valleys have kept them separate. Large physical barriers (top illustration) such as oceans and mountains not only separate populations of the same species but also sleep whole families and orders apart, as is shown by the marsupials of both Australia and South America.

Reproductive isolation also occurs when two or more species inhabit the same geographical area. The barriers to gene exchange can take two forms, acting either by deterring fertilization or by lowering the survival potential or fertility of any hybrids.

Isolation by habitat (Fig 2, 3) is most common in plants but also evident in some animals. Individual plant species are often adapted to a specific soil condition and their hybrids are unable to survive in either of the two habitats.

In animals one of the most important isolating mechanisms is mating preference, which is widespread in animals inhabiting the same geographical areas. One of the most striking differences between closely related species is the ability of individuals to recognise breeding partners of the same species. Elaborate courtship displays and differences in the color of an animal's external covering ensure that only individual of the same species mate. Other cues to breeding partners may include smell, the distinctive calls of most species of birds and even the croaking of frogs and singing of crickets. Without these stimuli many animals will not mate.

It was long believed that in animals the differences in the genitalia of different species led to reproductive isolation where, for example, the male genitalia could not physically fit into the female genitalia. Recent observations have shown that this kind of mechanical isolation does not operate in animals although in plants similar mechanical isolation ranks in importance with ethnological (behavioral) isolation in animals. Differences in flower structure prevent pollination and fertilization between unrelated species. Plants exploit the activities of animals to spread their genes, and differences in flower structure, color, and scent attract various kinds of pollinators to different species. This reduces the chances of cross-pollination between two unrelated species. In California, for example, there are related species of a flower (Penstemon) that have different sized flowerheads. The different species are pollinated respectively by large bees, smaller bees and solitary bees.

Another possible isolating feature is found in the seasonal differences in reproductive activity, but this alone would be unlikely to keep species distinct. If fertilization does occur between species it is quite likely that one of three mechanisms may have an effect. Often the first generation hybrid is rather weak because of abnormal genetic matching and rarely survives to reach reproductive maturity. The hybrids although healthy are often sterile, as is seen in the mule – the offspring of a horse and donkey. When the hybrids are healthy and reproductively active, the final mechanism comes into play by ensuring a gradual breakdown of genetic harmony so that the hybrid line dies out.