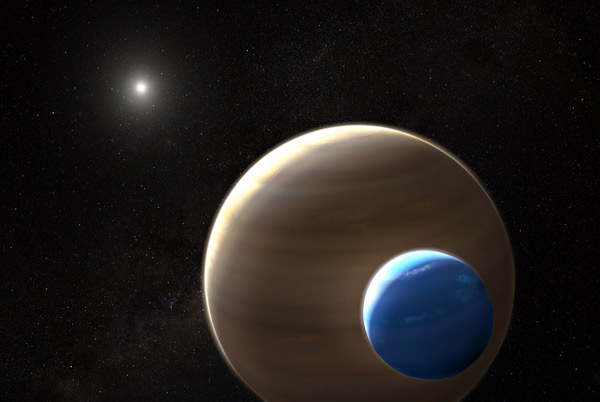 An exomoon is a moon of an exoplanet – a planet outside the Solar System. To date the discoveries of two exomoons have been announced [1], both by the same team of astronomers, though these discoveries have yet to be confirmed.

Because of their smaller size, exomoons are harder to detect than exoplanets, of which several thousand are now known. The two that have been found are both much larger than any moons on the Solar System. The first to be spotted, in 2016 [1], was a Neptune-sized moon in orbit around the Jupiter-sized exoplanet Kepler-1625b, whose star lies about 7,600 light-years away. The more recent discovery, announced in January 2022 [2], is of a moon about a third the size of Neptune around the planet Kepler 1708b, a world 5,500 light-years from Earth. Both supermoon candidates are likely made of gas that has piled up under the gravitational pull caused by their enormous size. It has also been suggested both super-moons may have started out as planets in their own right, only to be captured by the gravitational pull of the even larger planets they now orbit. Both moons are located far from their host star. In fact, the researchers sought out cold, giant gas planets on wide orbits in their search for exomoons precisely because the closest analogs in our own Solar System, Jupiter and Saturn, have more than a hundred moons between them.

If other moons are out there – and it seems almost certain that there is a very large numbers of them – it is likely that the majority will be smaller than the two detected so far and therefore harder to spot. Big exomoons, like big exoplanets, are simply the easiest to detect with our limited sensitivity.

Kepler 1625b I is a candidate exomoon slightly less than half the diameter of Jupiter and with a mass 19 times that of Earth in orbit around a planet that is larger and more massive than Jupiter (Fig 1). This planet, in turn, orbits the yellow star Kepler 1625 with a period of 287.4 days at a mean distance 0.87 AU (where 1 AU is the average distance of Earth from the Sun). The discovery of Kepler 1625b I, by the transit method, was announced in 2016 and awaits confirmation.

Kepler 1708b I is a candidate exomoon about one-third the diameter of Neptune, or 2.6 times that of Earth. It orbits a planet that goes around the star Kepler 1708, which lies 5,500 light-years away.