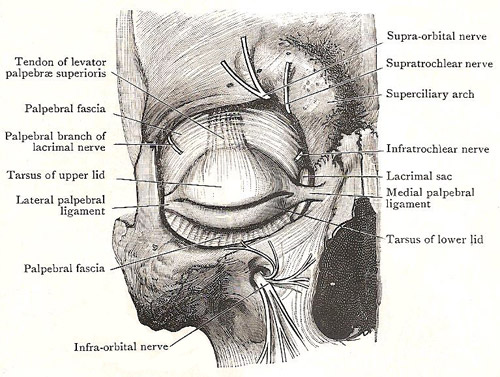 Dissection around the right eye. 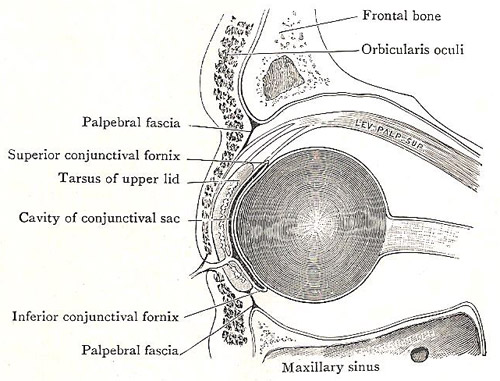 Cross section of the eye and surrounding structures.

In the eyelid, or palpebra, are the following layers:

In addition to these layered structure, there are the palpebral ligaments at the end of the tarsi, the tarsal glands on the deep surfaces of the tarsi, and the ciliary glands behind the roots of the eyelashes.

The skin of the eyelids is very thin, and its hairs (except the eyelashes) are so short that few of them appear above the surface.

The superficial fascia also is thin, and it contains no fat. Its superficial part is loose, and the skin therefore moves easily; it is in this part that effused blood accumulates in a "black eye". Its deeper part contains the palpebral part of orbicularis oculi.

The tarsi are two thin plates of condensed fibrous tissue which lies close to the free margins of the eyelids, and stiffen them.

The tarsus of the lower eyelid is a narrow strip placed between the orbicularis and the conjunctiva, and its lower edge is connected with the inferior orbital margin by the palpebral fascia.

The tarsus of the upper eyelid is much larger, and can be felt if the lid is pinched up sideways between finger and thumb. Its deep surface is adherent to the conjunctiva. The lower part of its superficial surface is covered with the orbicularis; but the upper part and the upper border are separated from the orbicularis by (1) the palpebral fascia, which is attached not to its upper border but to its anterior surface some distance below that border, and (2) the tendon of the levator palpebrae superioris muscle, which expands and fuses with the back of the palpebral fascia. The lower edge of the tarsus is adherent to the skin of the margin of the lid.

The tarsal glands lie in furrows on the deep surface of the tarsi. When a lid is everted, they are seen, through the conjunctiva, as closely-placed, parallel, yellow streaks that run at right angles to the margin of the lid. Their ducts open on the margin behind the eyelashes.

The palpebral fascia is a thin fibrous membrane which occupies the interval between the tarsi and the margins of the orbit, forming, with the tarsi, a septum between the orbit and the exterior. Its peripheral border is attached to the orbital margin, except at the medial side, where it passes behind the lacrimal sac to be attached to the posterior margin of the groove for that sac. The part in the lower lid is connected with the lower border of the tarsus. In the upper lid, it blends with the anterior surface of the expanded tendon of the levator palpebrae superioris, and is attached with it to the anterior surface of the upper tarsus. It is pierced by the nerves and vessels that emerge from the orbit above the eye.

The medial palpebral ligament is a strong fibrous band that connects the two tarsi with the medial margin of the orbit. It lies under cover of the skin, across the front of the lacrimal sac, and gives origin to many of the fibers of the orbicularis oculi.

The lateral palpebral ligament is a slender fibrous band that lies behind the palpebral fascia, separated from a little fat. It connects the two tarsi with a little tubercle on the lateral margin of the orbit.


Vessels and nerves of the eyelids

The arteries are derived from the ophthalmic and its lacrimal branch. There palpebral arteries pierce the palbebral fascia to enter the lids; they anastomose to form arches near the margins of the lids, between the tarsus and the orbicularis oculi.

The veins run medially towards the root of the nose, and end in the supratrochlear and anterior facial veins.

The nerves are numerous. The motor nerves to the orbicularis oculi come from the temporal and upper zygomatic branches of the facial nerve. The sensory nerves to the upper lid are the palpebral branch of the lacrimal nerve and twigs from the supraorbital, supratrochlear, and infratrochlear nerves. The infraorbital nerve supplies the lower lid.