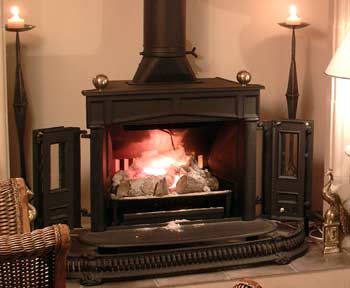 A Franklin stove is a freestanding, cast-iron, wood-burning stove, open at the front and with baffles at the back to improve airflow. It is named after Benjamin Franklin who is credited with its invention in 1742, although some historians think it was developed earlier. Certainly, Franklin improved the metallurgy of the cast iron so that it didn't crack when fired and promoted use of the stove.

Also known as a circulating stove or (as Franklin himself called it) a Pennsylvania fireplace, the Franklin stove provided more heat with greater safety than a conventional fireplace. In the US, it was used to warm frontier dwellings, farmhouses, and urban homes for more than 200 years.

Franklin's original design called for the opening to the flue (behind the baffles) to be in the floor of the stove, which was a bad idea because it meant the hot exhaust gases had to flow down before going up the chimney. Others soon corrected the design, however, and Franklin himself made a much improved version with better fume extraction and a provision for the use of coal, sometime in the 1770s.

Compared with modern wood-burning stoves and pellet stoves, traditional Franklin stoves are not a good choice when it comes to efficiency, clean burning, or safety. However, they are still vastly preferable to, say, a large inglenook fireplace that simply sucks the heat from a room and sends it up the chimney.

Some contemporary Franklins come with glass-fronted doors that can be opened to give the immediate warmth and beauty of an open fire, or closed to yield the advantages of an efficient, slow-burning stove.