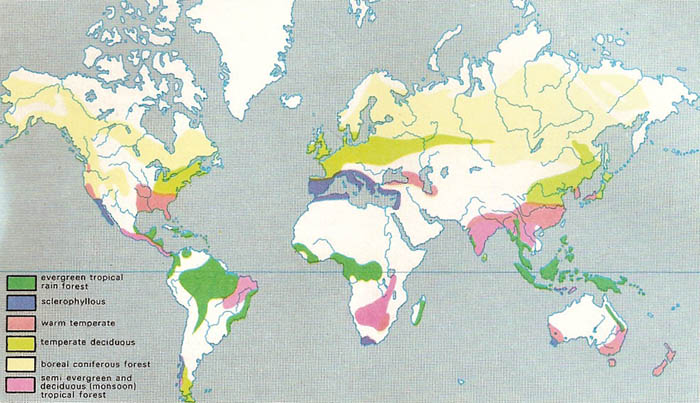 The forest zones of the Earth.

Forests are extensive tracts of land whose vegetation is composed most notably of trees. Forests are of considerable importance to humans in particular and the global ecosystem in general. They have provided fuel and building material since prehistory; their fruits have served as food; and, they play an important role in countering soil erosion.

Coniferous forests have as characteristic trees the conifers – pine, spruce, and fir – and are found in temperature regions as far north as the edge of the tundra. They are similarly distributed in the southern hemisphere.

Deciduous forests, found in temperate zones, are characterized by deciduous trees with some conifers. They contribute most of the world's commercially important hardwood; e.g., oak, elm, beech, and birch.

Rain or equatorial forests are found in equatorial regions, where there is no dry season. These dense jungles support the wild rubber tree, and also exploited as sources of mahogany and ebony.

Monsoon forests are found in monsoon regions, and resemble rain forests except that they are more open. Their trees have adapted to the marked dry season. They are a source of teak, a commercially important hardwood.

Thorn forests occur in tropical and subtropical areas where rainfall is insufficient to maintain larger trees. They are characterized by shrubs and small trees; e.g., mesquite and acacia. The thorn forest of Brazil is known as the caatinga.

Fossil or petrified forests, best known of which is that of eastern Arizona, occur where collections of trees have been petrified, usually by mineralization.