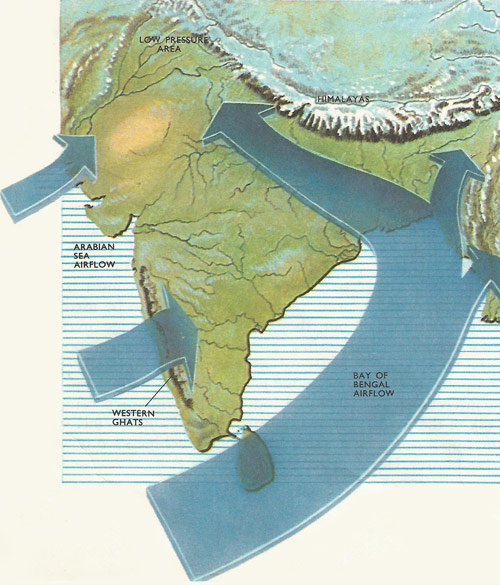 A diagram showing the course of the warm-moist airstream from the Indian Ocean over India during the height of the wet monsoon. Note the great sweep of the Bay of Bengal airstream as it is sucked into the low pressure area over north-western India and the deflecting effect of the Himalayas. 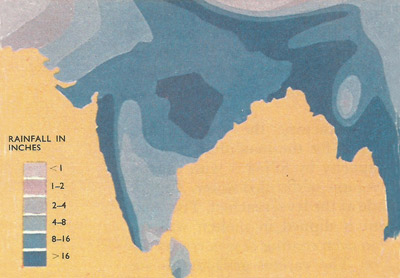 A July rainfall map for India. 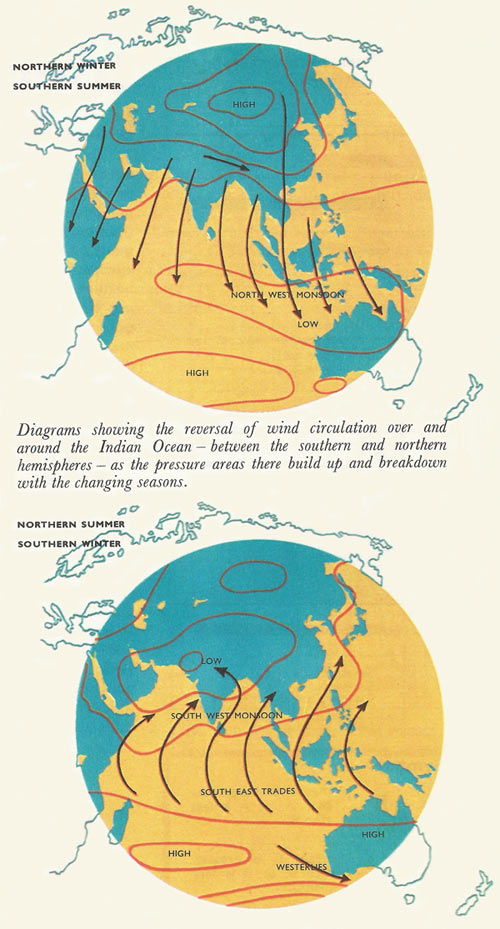 Diagrams showing the reversal of wind circulation over and around the Indian Ocean – between the southern and northern hemispheres – as the pressure areas there build up and breakdown with the changing seasons.

A monsoon is a seasonal wind, especially in south Asia. In summer, which is the monsoon season, the winds normally blow from the sea to the land and bring rain, but in winter there is a complete change of direction and the winds blow out from the land, giving dry weather. Some monsoon regions are very wet. Cherrapunji in India, for example, receives over 11,000 mm (433 in) per year, but others can be dry, such as the Thar Desert between India and Pakistan where the annual rainfall is less than 250 mm (10 in). The major monsoon areas are in Asia, where the seasonal reversal of wind is greatest. This is because the largest continent, Asia, is adjacent to the largest ocean, the Pacific. In the small continents of South America, Africa, Australia, and North America, the monsoonal effects are less marked. These small continents do not have such wet summers or such dry winters, and are sometimes referred to as "eastern marginal" rather than true monsoon.

Caused by low pressure areas over land masses in the summer (see diagram), monsoons bring wet winds from the sea, and high pressure areas in the winter causing dry winds to blow from the land. During the summer (top) large areas of mainland Asia are heated by the Sun. The air over these regions expands and rises forming regions of low pressure. Wet winds from the sea then blow into these areas giving the summer monsoons. In the winter (bottom), the situation is reversed and regions of high pressure are formed over the land. Dry winter monsoon winds then blow out to sea. The paths of these winds are deflected due to the Coriolis effect.

The mere mention of the word monsoon conjures up in the mind torrential downpours, accompanying floods, swirling muddy water, families fleeing from their homes for the safety of high ground. 'What is the wettest place in the world?' is a common general knowledge question, and the fact that it is Cherrapunji at the foot of the Himalayas with an annual rainfall of around five hundred inches explains why one also thinks of India when one hears the term. Although the tropical downpours of a monsoon are certainly very spectacular not all monsoons, as mentioned above,are wet. Monsoon in fact means season; there are both dry and wet monsoons.

India and South-East Asia form a region where monsoon conditions most readily show themselves and where ideal monsoon conditions exist. To the north lies Earth's most formidable mountain barrier, the Himalayas, and its associated ranges, and beyond this stretches the greatest land-mass Asia; to the south is the warmest ocean. The chains of mountains which hem India in to the north are so effective a barrier to external influences that the intense low pressure are formed over North-West India in summer filled by winds from the south only. Thus winds that are warmed and enriched with moisture from the Indian Ocean roar in over the parched country producing incredible rainfalls over much of the land, particularly along the western coast (due to the influence of the Western Ghats which rise up to 8,000 ft) and up the Ganges valley where the winds are channelled by the solid wall of the Himalayas.

But monsoons are not just restricted to India. What conditions are necessary for their occurrence and how do they occur?

The land absorbs heat faster than the sea. Hence in summer the continuous heating of Earth's land masses produce convection currents as warmed air rises. The net result is a relatively low-pressure area over each land mass into which air tends to flow from the relatively high pressure area over the sea, so that winds are created. If these winds are moisture-laden then rain will fall over the land onto which they blow – this is a wet monsoon. Conversely, the land gives up its heat faster than the sea, so in winter when the air over land masses is becoming cooler, it tends to sink and creates zones of relatively high pressure from which winds blow outwards, that is from the land to the sea. Having passed over land only, the air masses are relatively dry and little or no rain falls – these are the characteristics of a dry monsoon. Any land masses that are large enough to influence the pressure systems in this way will have monsoonal tendencies. A monsoon may be wet or dry depending on the direction of the wind system. An important characteristic on monsoon regions is that the wind direction is reversed from summer to winter and hence there is a marked wet and dry season. A monsoon is in fact an example on a tremendous scale of the natural tendency for winds to blow onshore in the daytime as cooler air blows in from the sea to replace that rising from the land. At night the position is reversed, for the sea retains its heat longer than the land and cooler air from the land blows offshore to replace the warmer air rising off the sea.

Areas with monsoonal tendencies are more dominant in the northern hemisphere than in the southern one because a much greater proportion of the earth's land surface occurs in the former. Thus monsoons also affect East Africa and Abyssinia, Australia, Europe and North America also show monsoonal tendencies, though the two latter regions have no monsoons as clearly defined as those of the other areas.

The monsoons affecting Abyssinia, East Africa, Australia, India, South-East Asia, China and Japan are all offshoots of the same great air circulation over and around the Indian Ocean. Pressure over Asia is low in summer when it is high over Australia and the southern Indian Ocean. Conversely pressure over Asia is high in winter but low over, and to the north of, Australia. From May to October, winds blow northwards from Australia towards Asia, first as the south-east trades, before they swing to a north-easterly direction, and as the south-western monsoon deflected by the Earth's spin as they cross from the southern to the northern hemisphere. In their passage across the Indian Ocean they pick up large quantities of moisture, which they deposit over India, the Philippines, and Japan. Abyssinia and East Africa also receive most of their rain at this time. Australia, where the pressure is high, and consequently which has winds blowing outwards from it, has little or no rain between May and October except in the south, which comes under the influence of the wet westerlies.

But as the sun returns to the southern hemisphere a low pressure area builds up over northern Australia and the East Indies and a high pressure area over Asia. Winds sweep outwards from this over the East Indies towards Australia and gradually the rains spread southwards across northern and eastern Australia. Central and south-western Australia have very little rain at this time. Little of the winds emanating from the Asiatic high pressure zone affect India because of the barrier of the Himalayas, so that although this is called the cold season, India never experiences the bitter cold that is characteristic of Asia to the north, especially China, in winter. A secondary high-pressure area is established over the Punjab and winds blowing outwards and southwards from this join with the Asiatic airflow from China. Only Ceylon and the south-eastern tip of India have appreciable amounts of rain at this time, from winds which have picked up moisture while blowing down the Bay of Bengal.

By the beginning of spring in the northern hemisphere, India's cold spell has become the hot season, and this increases in intensity as the sun moves overhead further north. Due to a rapid increase in convection currents, the high pressure zone breaks down and a low pressure area is established. This build-up of the low pressure area is a time when violent thunderstorms occur and although these may at times do serious damage to crops they also bring much-needed rain to the spring rich crop in Bengal and encourage the first growth of the tea bushes in Assam.

This intermediate, stormy period heralds the approach of the wet monsoon which 'bursts' with great suddenness over western India as the airflow from the southern Indian Ocean becomes continuous. The 'burst' may be followed by brief fine spells before the rains really start in earnest. The incredible thing about the bursting of the monsoon is that it always occurs within a week or so of the same date each year although the actual time varies from place to place, according to its latitude. A late bursting of the monsoon or an early retreat can spell economic ruin to farmers, many of whom rely upon the rains to fill the storage tanks that supply the crops with water during the succeeding dry season.

The south-westerly airflow reaching India forks roughly into two branches, one, the Arabian Sea branch, depositing most of its rain over the Western Ghats, and a second, the Bay of Bengal branch, sweeps over the sea between Ceylon and Sumatra before being drawn northwards and westwards into the low pressure area over northern India, deflected by the Himalayas.