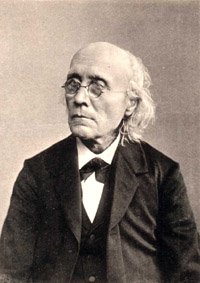 Gustav Fechner was a German physicist and founder of experimental psychologist, usually remembered for his reformulation of Ernst Heinrich Weber's (1795–1878) conclusions concerning the increase in a stimulus needed to make someone aware that there was a difference. Fechner's law (or the Weber-Fechner law) states that the perceived intensity of a sensation increases with the logarithm of its stimulus.

Among his other work, Fechner studied aesthetic aspects of the golden ratio and published his findings in Vorschule der Aesthetik (1876), arguing that this ratio turns up commonly in human-made rectangular objects and is judged by people to be the most pleasing to the eye (though some later researchers have called his results into question).