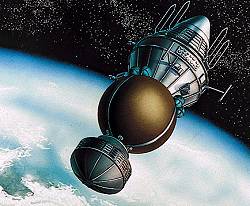 Foton is a series of recoverable microgravity science satellites based on Zenit-class Soviet spy spacecraft of the type that also served as Gagarin's Vostok capsule. The Foton consists of a spherical reentry capsule sandwiched between a battery pack that separates before reentry and an expendable service module with a solid-propellant retrorocket. The total mass is about 6.5 tons of which 400 kg is science payload. Foton satellites remain in an approximately 215 × 380 km × 63° orbit for 12 days, carrying out experiments such as materials processing, before de-orbiting. The first Foton was launched on Apr 16, 1985, and the most recent, Foton-12, in 1999.