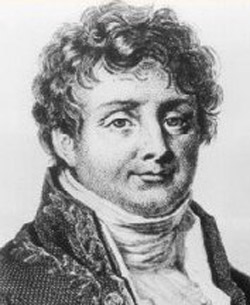 Joseph Fourier was a French mathematician best known for his contribution to the mathematical analysis of heat flow and for showing that all periodic oscillations can be reduced to s series of simple, regular wave motions.

Although he trained for the priesthood, Fourier didn't take his vows but instead turned toward mathematics. He first studied and later taught mathematics at the newly created Ecole Normale. In 1798 he joined Napoleon's army in its invasion of Egypt as scientific advisor, to help establish educational facilities there and to carry out archaeological explorations. After his return to France in 1801 he was appointed prefect of the department of Isere.

Fourier became famous for his Theorie analytique de la Chaleur (1822), a mathematical treatment of how heat is conducted within solid bodies. He established the partial differential equation governing how heat flows and solved it by using infinite series of trigonometric functions, now known as Fourier series. Though these series had been used before, Fourier investigated them in much greater detail and prepared the way for later work on trigonometric series and the theory of functions of a real variable. Fourier's belief that his health would be improved by wrapping himself up in blankets proved fatal: thus encumbered he tripped down the stairs of his house and killed himself.