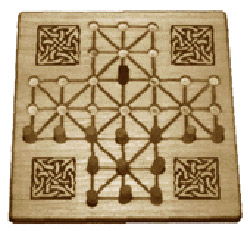 Fox and Geese is an English board game that dates back to the Middle Ages and is unusual in that the two sides are unequal, thus making this an example of a Tafl game. The lone fox attempts to capture 13 (or, in later versions, 17) geese, while the geese try to hem the fox in so that it can't move. The geese start out by filling up all the points on one side of the cross-shaped grid on the board. The fox – the one counter of a different color – begins on any vacant point remaining. The fox moves first. Each side, in its turn, may move one counter. Both fox and geese can move along a line, forwards, backwards, or sideways, to the next contiguous point. The fox may move along a line or jump over a goose to an empty point, capturing the goose and removing it from the board. Two or more geese may be captured by the fox in one turn, providing that he is able to jump to an empty point after each one. The fox wins if he depletes the gaggle of geese to a number that makes it impossible for them to trap him. The geese can't jump over the fox or capture the fox but instead must try to mob him and trap him in a corner. The geese win if they make it impossible for the fox to move. A modification of this game spread with the British to India, where during the Great Mutiny the game became known as "Officers and Sepoys". In this variant, two officers in a fort attempt to hold off 24 sepoys, who must storm the fort.