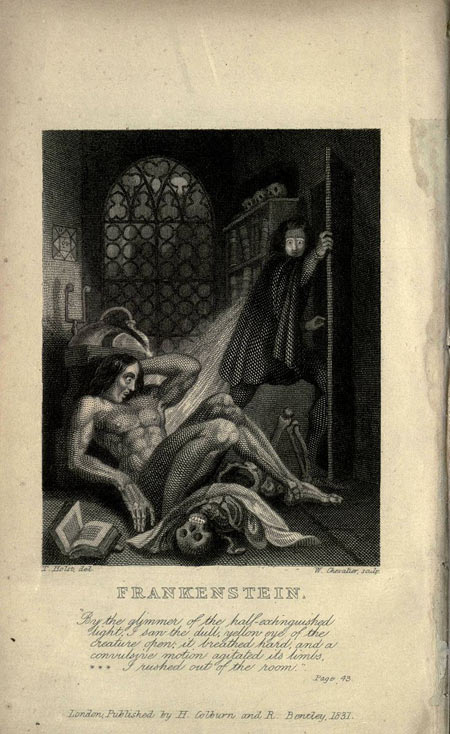 Inside cover art from the 1831 edition of Frankenstein.

Frankenstein; or, The Modern Prometheus is a novel by the English author Mary Wollstonecraft Shelley (1797–1851). It can be seen as one of the earliest examples of science fiction in literature. Aged just 18, the writer was visiting the Villa Diodati near Lake Geneva with her husband, the poet Percy Shelley. The property had been rented by Lord Byron and John Polidori for the summer of 1816, and the Shelleys were staying close by. One evening, Byron suggested that they each write a ghost story: Frankenstein was the story that formed in Mary Shelley's mind. It would be another two years, however, before the book was finally published.

In a series of letters, Robert Walton, the captain of a ship bound for the North Pole, recounts to his sister in England the progress of his mission. Successful early on, the journey is soon interrupted by seas full of impassable ice. Trapped, Walton encounters Victor Frankenstein, who has been traveling by dogsled across the ice and is weakened by the cold. Walton takes him aboard, helps nurse him back to health, and hears the fantastic tale of the monster that Frankenstein created.

Victor first describes his early life in Geneva. At the end of a blissful childhood spent in the company of Elizabeth Lavenza (his cousin in the 1818 edition, his adopted sister in the 1831 edition) and friend Henry Clerval, Victor enters the university of Ingolstadt to study natural philosophy and chemistry. There, becomes obsessed with discovering the secret of life and, after several years of research, becomes convinced that he has found it.

Victor spends months fashioning a creature out of old body parts. One night, in the secrecy of his apartment, he brings his creation to life. When he looks at the monster that he's created, however, the sight horrifies him. After a fitful night of sleep, interrupted by the specter of the monster looming over him, he runs into the streets, eventually wandering in remorse. Victor runs into Henry, who has come to study at the university, and he takes his friend back to his apartment. Though the monster is gone, Victor falls into a feverish illness.

Sickened by his horrific deed, Victor prepares to return to Geneva, to his family. Just before leaving Ingolstadt, however, he receives a letter from his father informing him that his youngest brother, William, has been murdered. Grief-stricken, Victor hurries home. While passing through the woods where William was strangled, he catches sight of the monster and becomes convinced that it is his brother's murderer. Arriving in Geneva, Victor finds that Justine Moritz, a kind girl who had been adopted by the Frankenstein household, has been accused. She is tried, condemned, and executed, despite her pleas of innocence. Victor grows despondent, guilty with the knowledge that the monster he has created is responsible for the death of two innocent loved ones.

Hoping to ease his grief, Victor takes a vacation to the mountains. While he is alone one day, crossing a glacier, the monster approaches him. He admits to the murder of William but begs for understanding. Lonely and shunned, he says that he struck out at William in a desperate attempt to injure Victor, his cruel creator. The monster begs Victor to create a mate for him, a monster equally grotesque to serve as his sole companion.

Victor refuses at first. The monster is persuasive, however, and eventually convinces Victor. After returning to Geneva, Victor heads for England, accompanied by Henry, to gather information for the creation of a female monster. Leaving Henry in Scotland, he secludes himself on a desolate island in the Orkneys and works at repeating his first success. One night, struck by doubts about the morality of his actions, he glances out the window to see the monster glaring in at him. Horrified by the possible consequences of his work, Victor destroys his new creation. The monster, enraged, vows revenge on Victor's wedding night.

Later that night, Victor takes a boat out onto a lake and dumps the remains of the second creature in the water. The wind picks up and prevents him from returning to the island. In the morning, he finds himself ashore near an unknown town. Upon landing, he is arrested and informed that he will be tried for a murder discovered the previous night. Victor denies any knowledge of the murder, but when shown the body, he is shocked to behold his friend Henry Clerval, with the mark of the monster's fingers on his neck. Victor falls ill, raving and feverish, and is kept in prison until his recovery, after which he is acquitted of the crime.

Shortly after returning to Geneva with his father, Victor marries Elizabeth. He fears the monster's warning and suspects that he'll be murdered on his wedding night. To be cautious, he sends Elizabeth away. While he waits for the monster, he hears Elizabeth scream and realizes that the monster had been hinting at killing his new bride, not himself. Victor returns home to his father, who dies of grief a short time later. Victor vows to devote the rest of his life to finding the monster and exacting his revenge.

Victor tracks the monster northward into the ice. In a dogsled chase, he almost catches up with the monster, but the sea beneath them swells and the ice breaks, leaving an unbridgeable gap between them. At this point, Walton encounters Victor, and the narrative catches up to the time of Walton's fourth letter to his sister.

Walton tells the remainder of the story in another series of letters. Victor, already ill when the two men meet, worsens and he dies shortly after. When Walton returns, several days later, to the room in which the body lies, he finds the monster weeping over Victor. The monster tells Walton of his immense suffering, hatred, and remorse. He says that now his creator has died, he too can end his suffering. The monster then departs for the northernmost ice to die.