Imagine a solid body, a cube for example, immersed in water (1): the water will press against all sides of the cube, since a fluid transmits pressure in all directions. The pressure against each pair of side faces will balance and cancel out; however, the pressure downwards on the top will not be the same as the pressure upwards on the bottom, since the bottom is more deeply submerged that the top (2). A column of water, let us say A inches high, presses on the upper surface, and the weight of the column of water is equal to the downwards pressure, while a column of water equal to that of the longest arrow presses upwards against the lower surface (3). There is more force pushing up than pushing down on the cube.

However, we must also consider the weight of the cube. Imagine the column of water which is pressing up against the lower surface of the cube, shown on the right of figure (4); now, if the weight of the cube is equal to that of an equal volume of water, the two columns on the left and on the right of figure (4) would have the same weight and would balance each other, as shown in figure (5). If the cube weighs less than the water it has displaced, the column on the right (that is to say the one which is pushing up from below), will be heavier, and will exert the greater force, and will therefore keep the cube afloat (6). If the cube weighs more than the water which it has displaced, it will sink.

The truth of these laws is shown by the fact that even very dense bodies such as iron, steel, and lead, can float – provided that they displace more water than their own weight. To take a practical example: a lump of lead weighs a ton; if it is put into water it will sink because it displaces a volume of water which only weighs two cwt. In this case the weight of the lead (1 ton) is greater than the buoyant force (2 cwt.) of the water, and therefore the lead sinks (10).

But if we were to hammer the lead into the shape of a bowl, we would greatly increase its volume, and when it is put into the water it would float, because although it still only weighs a ton it no longer displaces only a 2 cwt. of water. In its new shape it displaces more, and Archimedes' principle tells us that when it is freely floating it displaces its own weight of water (11).

The lead therefore now presses with the force of a ton on the water, but also receives support from the water which is equal to a ton, and therefore it remains afloat (12).

Displacement of a ship.

Water displaced by a ship. 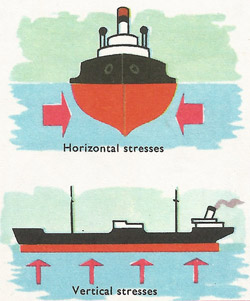 Forces on a boat.

Cross-sections through a submarine.

In 1787 John Wilkinson launched on the river Severn a barge made of iron, the watching crowd could not believe that this, the first iron ship, could float. They had come prepared to laugh at John Wilkinson's embarrassment when his new-fangled barge sank. But the iron barge floated and was the forerunner of the modern steel ship.

It is now commonplace to see ships weighing thousands of tons not only floating on the sea, but carrying thousands of tons of merchandise as well. It is common because their designers know of the law discovered about 250 BC by the Greek scientist Archimedes. Known as Archimedes' principle, this states that: A body immersed in a fluid (i.e. a liquid or a gas) loses an amount of weight equal to the amount of the fluid displaced. Put another way this says: The body immersed in the fluid is buoyed up by a force which is equal to the weight of the fluid displaced.

We know, if only from our own experience, that a liquid presses against, that is to say, exerts a pressure on, anything which is immersed in it; this is why divers and submarines cannot descend below a certain depth; if they did they would be crushed by the pressure of the water.

An explanation of the physical ideas behind floating, sinking, and buoyancy is shown in the series of illustrations to the right.

Every ship, from a small boat to a transatlantic liner, has a weight: therefore, when it is in the water, the hull will sink to a certain level.

It will sink until a volume of water has been displaced which has the same weight as the ship. A ship which weighs, let us say, 10,000 tons, has a hull which displaces a quantity of water weighing 10,000 tons. The weight of a ship is often called its 'displacement' for this reason.

The water, of course, exerts pressure against every submerged part of the ship (look at the example of the submerged cube in the accompanying illustrations). The horizontal stresses, which tend to crush the hull, balance and cancel each other out. The vertical stresses constitute the forces considered by Archimedes which balance the weight of the ship.

The same considerations apply to bodies immersed in the air; because Archimedes' principle applies to any fluid. Thus a balloon will rise in the air if it is lighter than its own volume of air.

People have used the principle of Archimedes to make boats sink – and, of course, rise again!

The submarine was envisaged by the extraordinary minds of Roger Bacon and Leonardo da Vinci, but it was not until centuries later that men began to experiment with real underwater boats. The Dutchman, C. van Drebbel, made the first submarine in England in 1624. David Bushnell made one in the United States in 1775, and Robert Fulton constructed one in France in 1800. Others have since gradually developed the submarine until at the present time we have perfected submarines driven by atomic powered engines which can remain submerged for many weeks at a time.

The method of submerging a submarine is very simple: the weight if the boat is increased until it is greater than the buoyant force of the water which keeps it afloat. To do this sea water is allowed to enter the 'buoyancy tanks' displacing the air which they contain when the submarine is on the surface.

The several hundred tons of water which have come in increase the weight of the boat and eliminate the so-called 'reserve buoyancy' (which is the difference between the weights of water displaced when the submarine is floating and when it is totally submerged); when the boat with the water ballast weighs more than the volume of water displaced, it sinks. Most submarines can descend to a maximum depth of about 600 ft before the pressure of the water on the hull rises to a dangerous level.

The maneuvering of submerges submarines is controlled by means of horizontal rudders (hydroplanes) which are similar to those on aircraft.

To stop at a given depth, water is expelled by electric pumps until the weight of the ship is equal to the weight of the displaced water and there is then no tendency either to rise or fall. To surface, the water is pumped out, the ship becomes once more lighter than the displaced water, and the buoyancy of the water carries it back to the surface.