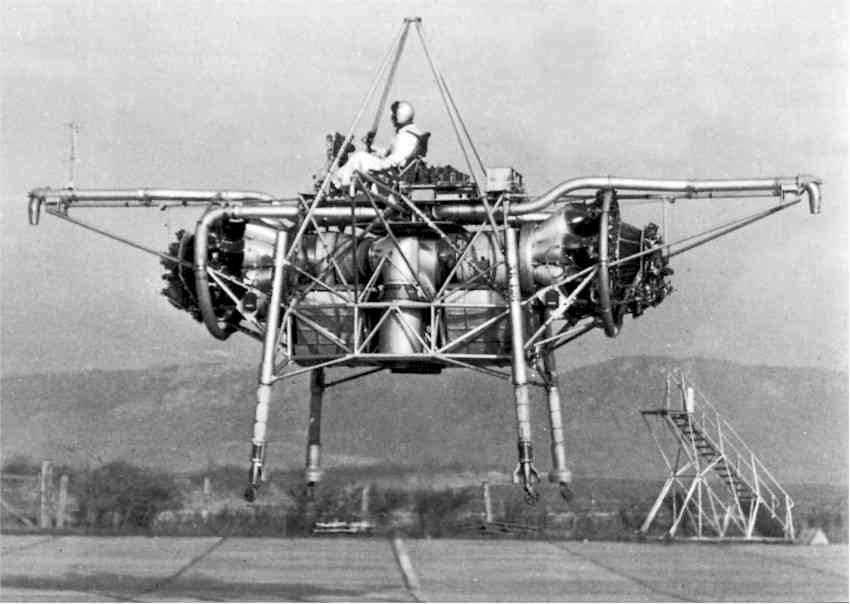 The Flying Bedstead, otherwise known as the Rolls-Royce Thrust-Measuring Rig (TMR), was an experimental aircraft that was first flown on August 2, 1954 and used in the early development of VTOL (vertical takeoff-and-landing) aircraft. The TMR was fitted with two MK4 Nene jet engines, which were standard Sea Hawk engines modified only by an air bleed system that allowed 10% of the engine compressor air to bleed off for the control systems of the rig. The engines faced in opposite directions to each other at the ends of a tubular construction; the efflux from the jet pipes – a central one and a bifurcated one from the other engine – was turned downward through 90°.

Two 95-gal fuel tanks were fitted under the engines and the whole rig supported by four hydraulic oleo legs. A platform across the structure above the engines had a seat bolted to it together with a conventional type control column and pedals that operated control valves from the engine compressor air bleed system collector box. The TMR was controlled by bleeding air from the engine through the control valves to diametrically opposed pipes, each equipped with a nozzle that could swivel 30° in either direction for turning the rig left or right. The control valves were also interconnected to the control column so that movement of the column would restrict the flow of air to the nozzles, thereby reducing the thrust and so controlling which direction the rig would go.

The thrust-to-weight ratio of the rig was critical: any vertical take off (VTO) aircraft must have a engine thrust that's greater than the total weight. The latter was minimized so as to keep within a 25% thrust advantage. Each engine provided a thrust of 3,850 lb, which, added to the 325-lb thrust from each of the bleed nozzles, gave a total available thrust of 8,350 lb. This compared with a total weight for the rig, complete with pilot and full fuel tanks, of 7,196 lb. Handling improved as fuel was consumed; total running time was about 15 min.

The first rig, called XA314, made an initial ground run on July 3, 1953, before first attempting to lift off the ground on July 6, piloted by wing-commander Harvey Hayworth, Rolls Royce chief test pilot. The rig lifted only to the full extent of the hydraulic oleo legs so that the wheels did not actually leave the ground. During these early days of testing, it was felt that for safety's sake the rig should be tethered; consequently, a large gantry was built and cables attached to either side and above the rig from cable drums built into the gantry. After 20 hr testing the rig was withdrawn on November 19, 1953 for extensive modifications and overhaul inspection of the engines.

After several months in the workshops the rig was rolled out again, put under the gantry, and a tethered flight carried out to test the new modifications. These were so successful that preparations were made for the first free flight. This took place on August 3, 1954, and was piloted by Capt. Ron Shepherd before a distinguished audience. The rig rose slowly into the air and was held steady in a hover attitude. It then moved forward, made a circuit of the test area was made, and demonstrated sideways and backwards movements before successfully landing. During the next four months a number of free flights were made, all at a height of 13-15 ft but one flight was made up to 50 ft to ensure that there was no ground effect influencing the rig. The final flight took place on the December 15, 1954. The rig was then transferred from Derby to Farnborough. A second rig, the XA426, was built and first flown on October 17, 1955. It conducted extensive tethered flying for 12 months before its first free flight on November 12, 1956. This rig crashed a year later on November 28, 1957, killing the pilot. Testing of the TMR subsequently ceased at Rolls Royce.

The Lunar Landing Research Vehicle (LLRV), of the early 1960s, was also referred to as the "Flying Bedstead."