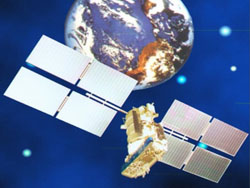 GLONASS (Global Navigation Satellite System) is the Russian GPS (global positioning system) and equivalent of the American NAVSTAR; both systems use the same techniques for data transmission and positioning. GLONASS is based on a constellation of active satellites that continuously transmit coded signals in two frequency bands. These signals can be received by users anywhere on Earth to identify their position and velocity in real time based on ranging measurements. The first GLONASS satellites were placed in orbit in 1982, but the full constellation of 24 satellites arranged in three orbital planes did not become operational until early 1996. Each satellite is identified by its "slot" number, which defines the orbital plane (1-8, 9-16,17-24) and the location within the plane. The three orbital planes are separated by 120°, and the satellites within the same orbital plane by 45°. The GLONASS orbits are roughly circular, with an inclination of about 64.8° and a semi-major axis of 25,440 km.